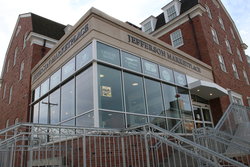 Ohio University’s Jefferson Marketplace has won the 2019 Facility Design Project of the Year Award from Foodservice Equipment & Supplies, a magazine distributed around the country, and will be recognized during the magazine’s 2019 Dealer of the Year and All Industry Awards Gala in May.

Jefferson Marketplace will also be featured in an upcoming edition of the magazine, with facility updates. It was previously highlighted for Facility Design Project of the Month in the magazine’s June 2018 issue.

“This facility combines both a foodservice operation and a marketplace under one umbrella,” said Joseph Carbonara, FE&S’ editorial director, in a recent statement. “The two features blend well together to address a variety of trends shaping today’s foodservice industry.”

Opened in January 2017 with the goal of creating an inviting neighborhood experience that could be enjoyed by students, staff, faculty and community members, OHIO’s Culinary Services Jefferson Marketplace offers a variety of fresh, local and global products.

The unique design of customer viewed production spaces and the elimination of a back-of-house kitchen, along with its wide array of products has inspired universities such as Virginia Tech, Penn State and the University of Georgia to visit Jefferson Market for ideas.

“It has a wow factor,” said Kent Scott, associate director, auxiliaries operations at OHIO. “When the students come in, they’re really excited to shop here. I think that we offer such a great variety of products and services.”

For those who have never been to the popular marketplace, concepts within the venue include The Brick City Deli, The Ohio Café, Steeped & Stirred, The Culinary Studio, Veggie Butcher and Juiced and the Grocery Market.

Guests can order from a traditional New York-style deli menu or customize a sandwich, grab a cup of tea, coffee, or a fresh squeezed juice; grocery shop and get produce processed for free all in one place — but that’s not all.

Jefferson Marketplace also features a selection of flowers for that special someone, a variety of greeting cards and various home goods such as pet food and automobile accessories, among many other items, making it a one-stop-shop for many of its visitors. Those wanting to shop local and support community organizations can find produce from the OHIO Farm along with the marketplace’s “Uniquely Ohio” grocery section.

The venue’s Culinary Studio is another one of many highlights of the marketplace. Culinary Services partnered with the Scripps College of Communication to create a unique learning environment for students through the Culinary Studio.

The Scripps College of Communication holds classes in the Culinary Studio and gains experience filming and creating food demonstration videos much like the Food Network. The staff and OHIO chefs at Jefferson Marketplace have hosted many Chef Tables for students and community members on a variety of food topics.  The Culinary Studio has also partnered with WellWorks on campus for cooking demonstrations for Wounded Warriors.

Upcoming events in the Culinary Studio include “March Match Up” with Chef Tim, on March 28 featuring local breweries and finger foods; local Ohio cider tasting and finger foods with Chef Kevin on April 12; and “Southwest Flare,” a hands-on demo with Chef Chito, on April 24.

This is not the first time one of OHIO’s dining facilities has been recognized by Foodservices Equipment & Supplies magazine. In 2017, The District on West Green in Boyd Hall won the 2017 Facility Design Project of the year for its emphasis on healthy menu items and micro-restaurants offering display cooking and self-service.