Alumni family gives back to their home away from home 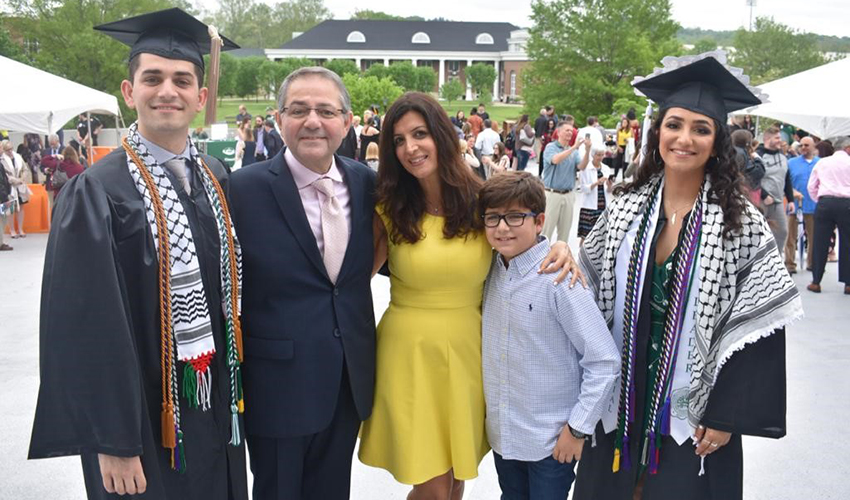 The Afyouni family poses outside the Convocation Center on graduation day for Nader, BBA ’19, and Amal, BA ’19.

Ohio University graduate Manaf Afyouni, BBA ’86, MA ’87, and his children, Nader, BBA ’19, and Amal, BA ’19, were inspired to create the Afyouni International Scholarship in hopes that the recipients would have the same meaningful experiences that the family had in Athens.

Their gift commitment established an endowment through The OHIO Match, and it includes a preference to support students from international backgrounds.

These two generations of family members were eager to create this scholarship together, celebrating their similar, outstanding experiences at Ohio University, and to ultimately give back to the place they called home—far beyond their actual home in Dubai.

Manaf grew up in Kuwait and arrived in Athens in 1982 to begin his college education at Ohio University and remained there until he obtained his graduate degree in 1987. Over 30 years later, he continues to visit often and maintains strong connections to many people on campus and in the community because of his strong love for Ohio University and the town of Athens.

“We wanted to create this scholarship because we felt that Ohio University gave us a lot and it was time for us to give back to the University,” said Manaf. “It’s also very interesting that when the three of us discuss our experiences, we find that even with a 32-year difference, our experiences were all the same—valuable. Ohio University gave each of us a personality, a sense of diversity, and the freedom in thinking. The bottom line is that each of us had the same memorable experience.”

Manaf’s son, Nader, also studied business, majoring in business economics and finance. Just like his father, Nader greatly appreciated his time at Ohio University and always felt comfortable on campus, no matter how far he was from home. Because of this strong sense of belonging that he experienced and the unique opportunities he had at Ohio University, he knew he wanted to do something generous in return.

“Athens always felt like a home for people coming from abroad. It was very easy to fit in and to meet people, which was very much interwoven in the culture of the campus. We just wanted to give back to help international students continue to feel welcomed,” Nader explained. “The communities that you become involved in during college end up being the most important things in your life at the time and you want to make sure that those opportunities continue to live on so that future students can also experience them.”

During Nader’s time at Ohio University, he served as the associate analyst for the Derivatives Management Group, was a member of Select Leaders and Delta Sigma Pi, and was also a student ambassador for the College of Business. All of these opportunities greatly contributed to his overall college experience and gave him the essential skills that he is able to continue utilizing in his current career as a financial analyst at Dell Technologies in Austin, Texas.

“No matter what college you’re in, there’s plenty of opportunity to get involved in organizations. The University provides us with so much and asks for very little in return, aside from your leadership and your contributions to the groups you are a part of,” said Nader. “When you feel that unique sense of belonging and you’re aware of the time and energy that faculty, staff and other students are investing into you, you’re just naturally inclined to do something nice in return.”

Amal, Manaf’s daughter, studied political science and sociology-criminology. She recognized the extreme expenses that are involved in getting an education in the United States as an international student, and wanted to help someone else get the same opportunity that she did, without finances being in the way.

“Being a legacy student, we got in-state tuition, which drastically made college a lot cheaper for my brother and me,” said Amal. “Had we not been legacy students, Ohio University would’ve been much more expensive, so having the chance to help international students have that same opportunity of having a reduced cost of education was very inspiring to me and made me really want to help make a difference in another student’s life.”

Amal held many leadership positions at Ohio University as she was the international affairs commissioner in the Student Senate, treasurer for Mock Trial, president of Phi Alpha Delta Pre-Law Fraternity, a chairwoman for Global Ambassadors, and was the 2019 Commencement speaker. Like Nader, she also continues to utilize the skills she developed and apply the concepts she learned at Ohio University to her current role as assistant program analyst for Universal Service Administrative Company in Washington, D.C.

“I think that being a good student has a lot of merit to it, but the beauty of OU is that it has so many organizations to offer,” said Amal. “I know that my experience would’ve been extremely different had I just been a student and not gotten involved, so I try to tell people as much as possible to get out there, get involved and join organizations. That’s how you make a lot of friends, but also how you grow yourself far beyond just being a student.”

While Amal was involved in many organizations on campus, she also dedicated much of her time to her involvement in the town of Athens. Not only did she want to give back to Ohio University, but she also wanted to make a difference in the Athens community.

“A lot of Ohio University students only focus on the school itself and not on the greater community of Athens. Junior and senior year, I really made it a point to volunteer and go out and explore Athens as a town,” said Amal. “That’s another reason I really wanted to give back because Athens has such a bursting personality that needs that push from students. Students shouldn’t treat Athens as Ohio University, but they should treat Athens as the town and then as the University. We need to take care of the community because they are taking care of us.”

Manaf is not only passionate about giving back to the University as a whole for all of the amazing opportunities he and his children had, but is also particularly eager to have a positive influence on the life of an international student.

“Ohio University gave the three of us the ability to think independently, and that’s something that we would like to pass on to another international student to give them the opportunity to come to Ohio University and experience what we experienced. The one thing that I will never forget about my education at OHIO is that I was accepted. Even though I was an international student, with a different name, different religion, and different background—I was still accepted and felt right at home,” Manaf explained. “We were able to celebrate diversity by being international students and would love for the University to continue to celebrate diversity in not only races and religions, but also nationalities.”

To contribute to the Afyouni International Scholarship, click here.