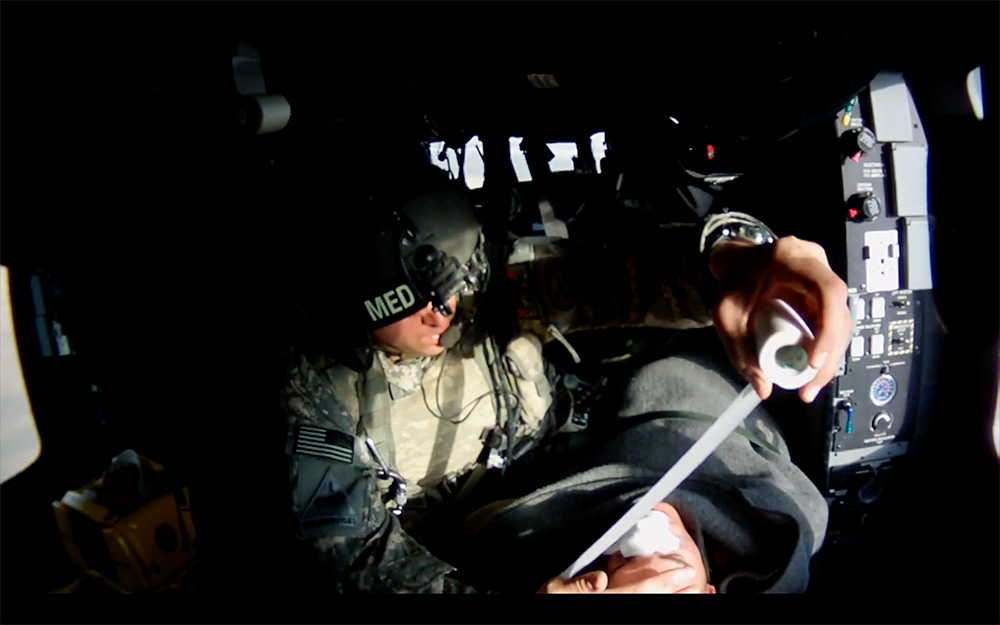 The Veterans Project A medvac pilot cares for a wounded soldier

The Athena Cinema will host a free public screening of “The Veterans’ Project,” at 1 p.m. Monday, Nov. 11. The Ohio University Heritage College of Osteopathic Medicine event will follow the annual Athens Veterans Day Parade in uptown Athens. A Q&A with the filmmakers will follow the screening.

The 2018 award-winning documentary takes an in-depth look at the challenges veterans face while navigating the complexities of the American health care system. In 2018, it was named “Best of Competition” for a faculty long-form documentary at the Broadcast Education Association Festival of Media Arts in Las Vegas and “best feature documentary” at the Angeles Doc Festival. It was also selected for the 2018 Columbus International Film and Animation Festival.

Dr. Fredricks said he is excited that “The Veterans’ Project” will be integrated into the Heritage College’s academic curriculum next semester.

“We have a new curriculum that our executive dean, Dr. Kenneth Johnson, is very proud of,” Dr. Fredricks said. “He’s trying to change the way we deliver medical education and part of that process is to look at veteran’s health care issues for one week during the students’ second year. It will be formalized into the curriculum next semester and I couldn’t be happier.”

Dr. Johnson explained why it was important for the Heritage College to host a local screening of the documentary on Veterans Day.

“As a college that is committed to improving the quality of healthcare for all, we were moved by the testimonies of veterans in this documentary and wanted to help shed light on the challenges that many veterans are facing,” Johnson said. “It’s exciting to be able share the film with the Athens community on Veterans Day. Not only does this screening honor our veterans, it also aids understanding of their challenges and unique health care needs.”

Dr. Fredricks and Plow first met during a chance encounter in January 2014.

After hurting his knee, Plow sought medical care at OhioHealth Urgent Care in Athens and was treated by Dr. Fredricks. After finding out that Plow had a background in film, Dr. Fredricks told him that he had an idea for a documentary and invited him to meet later to discuss the details.

“It was a serendipitous meeting,” Dr. Fredricks said.

Plow said once Dr. Fredricks pitched him on the film, he wanted to learn more. He said the first veteran interview they shot in October 2014 was a powerful, transformative moment for him.

“I went from yes I’ll help to I’m all in,” Plow explained. “I really became engaged in the project because I saw there was a major divide in the public’s understanding of these experiences.”

Plow and Dr. Fredricks have since made their partnership official by establishing Media in Medicine, a collaborative project that brings together visual media, the arts and medicine to create and teach through storytelling.

Dr. Fredricks said making the “The Veterans’ Project” was an interesting process.

“We assembled it as we filmed it and didn’t script it out, which is unusual,” he said. “I knew in my mind how I wanted it to go, but it evolved over time as we cut it. It was a very organic project.”

Plow said he and Dr. Fredricks wrapped up more than 40 interviews in November 2016 but took another 16 months to carefully edit the documentary.

Actor Gary Sinise, who is famous for his role as Lt. Dan in the movie, “Forest Gump,” serves as the moderator.

“We just asked him to do it and he agreed,” Dr. Fredricks said. “I’m a skilled producer and an adequate director, but I’m not an awesome narrator because I don’t have the voice for it – everyone knows Gary.”

Dr. Fredricks said “The Veterans’ Project” can be viewed for free on YouTube.

“It was never meant to be a profit making tool, but as a tool to inform people and to get them interested in starting dialogue about veterans’ health care,” he said. “When people have a chance to watch it, uniformly the feedback has been positive. It is serving the purpose of starting dialogue and allowing people to ask questions they didn’t know how to ask. They can tell veterans that they watched the film and ask them, ‘Is this really what happened to you?’”

“One of the most touching stories was from the wife of a medevac pilot who said she didn’t understand why her husband wanted to keep returning to Iraq,” Dr. Fredricks said. “She said that once she watched the documentary, she could then understand what he was motivated by. It helped them as a couple because she understood why he wanted to help wounded people. It was really affirming as a filmmaker to realize that you are having a positive impact on people’s lives.”

Dr. Fredricks invites everyone to use the documentary in a facilitated discussion format to enhance its effectiveness for change. He said he would love to see a network of veterans who are interested in teaching and have them connect with medical and nursing schools who want to host discussion forums on best practices for veterans’ health care.

“I think it works best when you have veterans available to discuss these important issues after watching the film,” Dr. Fredricks said. “My dream is to make Ohio University a center of excellence for veterans’ health care. If a medical student wants to work for Veterans Affairs or has an interest in dealing with veterans in the population, I hope they really consider the Heritage College because the school focuses on this.”

“I think the veterans are proud of the film and it was important to us that we didn’t portray any of them in a light that they find insulting or denigrating,” Plow said. “That’s difficult to do because what they share with us is very special and often private. It was quite a leap of faith and we’re very grateful to them.”

Plow said he didn’t realize how transformative the documentary would be.

“I was surprised about the emotional impact the documentary had on me as a filmmaker,” he said. “I got intimately familiar with some powerful testimonies and am surprised that even after watching the material hundreds of times, it still makes an emotional impact on me.”

Plow added that he hopes Monday’s screening in Athens reaffirms the documentary’s value as an educational tool and a dialogue starter.

“I think for the Heritage College, it’s important as part of their plan to be inclusive,” he said. “For Scripps College, it’s a way to show that what we do has value in these interdisciplinary settings. Really strong bridges can be built between disciplines at this university and some really good things can happen.”