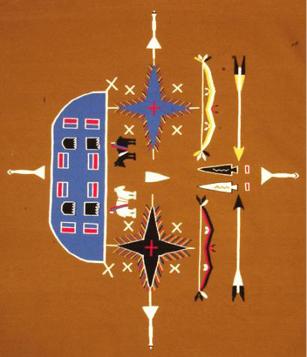 A unique aspect of KMA’s SWNA collection of nearly 700 textiles and over 2400 jewelry items is a series of over 100 weavings containing sandpainting imagery, commissioned from Navajo weavers by Edwin Kennedy over nearly four decades beginning in the 1960s. The majority of the sandpainting weavings were made by Red Rock area weavers Despah Nez and her two daughters, Anna Mae Tanner and Alberta Thomas, whose work is showcased in Night Skies. A weaving by Gladys Manuelito (niece of the famed weaver and ceremonial practitioner Hosteen Klah), and a version of The Night Sky by Two Grey Hills weaver Mary Ann Foster are also presented.