One of my favorite pieces in the KMA vault is “Kenneth Koch Poem Letter” by Jim Dine, a 1966 lithograph printed in color ink on handmade blue wove japan paper. 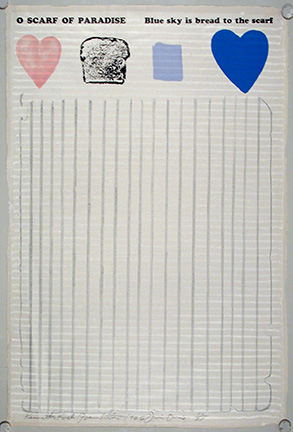 Jim Dine is a prolific painter, printmaker, sculptor, illustrator, performance artist, and stage designer. Dine was born in Cincinnati, OH, and earned his BFA from Ohio University in 1957. His career took off during his participation in the “Happenings” in New York City, a series of group installations, performances, and interactive sets. This interest in subversive, anti-art and anti-establishment artwork continued throughout his career. Dine found inspiration from everyday life and household objects, warranting many critics to label him as a Pop Artist, despite his resentment towards the label. Although Dine utilizes many Pop-Art styles and techniques, his motivations and interests have always been more personal and emotive. Dine’s artworks and objects are often stand-ins for the artist himself, triggering an emotional response rather than the cool, intellectual irony associated with Pop Art.

“Kenneth Koch Poem Letter” is a prime example of Dine’s simple style that is both whimsical and deeply emotional. Known for depicting common symbols and everyday objects, in this piece, Dine includes a pink heart, a piece of toast, a sky-blue color swatch, and a blue heart. The inscription above the four images reads, “O SCARF OF PARADISE/ Blue sky is bread to the scarf.” Here, “paradise” is coupled with the mundanity of “blue sky” and “bread,” conveying delight in domesticity.

I was particularly attracted to this print because of its combination of poetic verse and simple symbols. The title suggests that this work is either an homage to Kenneth Koch and his poetry, or Dine’s visual interpretation of one or more of Koch’s poems. Kenneth Koch, also born in Cincinnati, was a poet associated with the New York School of poetry that emerged during the 1950s, which used surrealism, irony, satire, and whimsy to create emotionally driven poems. Koch’s poetry often emphasized form and sound, rather than creating a narrative. Influenced by action painting and other avant-garde forms of expressionism, both Koch’s poems and Dine’s prints and paintings combine witty imagination, stream of consciousness, and emotional spontaneity.