Message From the President 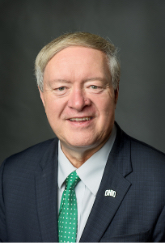 Ohio University was founded during a time in our nation’s history when the stroke of a pen could start a revolution, form a new government, and claim ownership for land beyond our borders. On February 18, 1804, it was a pen that declared Ohio University the first university in the new state of Ohio, an innovative idea during a time when public education was not yet accepted as a universal right for all citizens. At the moment of Ohio University’s founding, we existed simply on paper and in the hearts and minds of Revolutionary War veterans Manasseh Cutler and Rufus Putnam, who fought for our nation’s independence. They held the same belief as America’s Founding Fathers: that the education of the public was vital to cultivating good citizenry and the prosperous continuation of our republic. As time passed, Ohio’s first and finest institution of higher education became more than a mere idea, transforming the surrounding wilderness as well as the lives of those who traversed the rugged terrain in search of knowledge, wisdom, and love. For 214 years, OHIO has been gaining momentum as we constantly strive for greater Impact on our students, our professions, our communities, and our world.

A degree from Ohio University is highly attractive to employers. Our students are given a high-quality, unique education led by internationally-ranked faculty, whose focus on RESEARCH and INNOVATION sets us apart from the pack. The STUDENT EXPERIENCE at OHIO is one of transformation; more than 1/3 of our freshman students are first in their families to go to college. We serve our students so that they are then inspired to choose a life of PUBLIC SERVICE where the IMPACT of Ohio University extends generations and geographical divides.

The desire to creating something new, or to find a new way to do something, is in our blood here at Ohio University. Whether it is building a SMALL BUSINESS from the ground up, or redefining the ART of paint-making, our institution has served as an INCUBATOR for creative and innovative minds for more than two hundred years. Ohio University is invested in the growth of this region and our state, and we are dedicated to creating an ECOSYSTEM of ENGAGEMENT that is unmatched.

Many of the ways our faculty and students showcase their TALENTS is through the ground-breaking research and technology they initiate. Ohio University is LEADING the way in avionics engineering, development of alternative-fuels, and nuclear energy, among others. Our goal is to not only be a part of gathering and interpreting data, but also to INFORM ACTION to improve the lives and circumstances of individuals around the world.

Being a good neighbor is important to Ohio University. In addition to having an AWARD-WINNING partnership with the City of Athens, and using our resources for public good, we take the act of public service even further. Representatives from colleges and departments across campus have JOINED TOGETHER to help combat the opioid epidemic plaguing our region. And students and alumni from our Heritage College for Osteopathic Medicine are committing to stay in Ohio to SERVE their communities. How are we helping our world? OHIO is a leader in SUSTAINABILITY efforts and is addressing the issue of changes to our climate by setting a goal of becoming a zero-waste campus in the next few years.

With the most EXCITING band in the land, how can you not appreciate the joy and energy the Marching 110 brings to athletic and other student events around campus. Our students have access to over 525 student organizations that better ENHANCE their time at Ohio University. For over one-third of the students at OHIO, this is their family’s first college experience. Our main campus, along with the regional campuses and centers across the state, work to provide resources relevant to meet the academic and financial NEEDS of these, and all of our students. Our students come from all 50 states and more than 100 countries, but share one commonality – they are all BOBCATS, not just for four years, but for life.