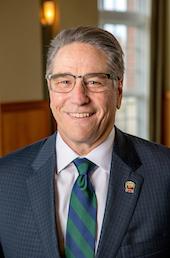 Dr. David Scholl served as President and CEO of Diagnostic Hybrids, Inc. (DHI) in Athens, Ohio from 1995 to 2010. Dave joined the fledgling company as Director of Research in 1983. Under his leadership, the DHI Team grew from a small startup to being named twice on Inc. 500’s list of Fastest Growing Companies in America, ultimately emerging as a world leader in the clinical virology medical diagnostics market. In 2003, Dave was the recipient of the Central Ohio Ernst and Young Entrepreneur of the Year Award in Life Sciences, and in 2006 was awarded BioOhio's Bioscience Leadership Award.

DHI’s dynamic growth led to its merger and sale in February 2010 to Quidel Corp of San Diego, California. Dave joined the Quidel executive team as a Senior Vice President until his retirement in October 2011. He currently serves as a venture partner with Athenian Venture Partners, a venture capital firm founded and based in Athens, OH that makes investments in private, high growth potential, innovative, technology-based companies focused on Healthcare and Information Technology market applications.