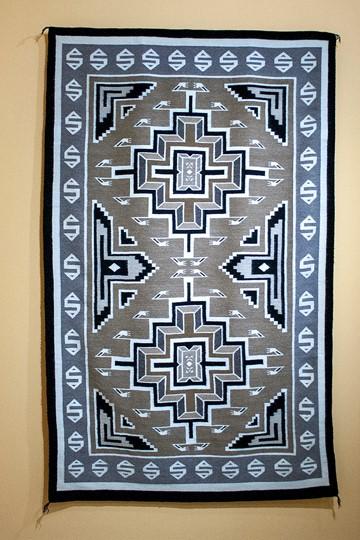 Shimá: This is a very special rug because it has spiritual arms that reach toward creativity and innovation—it conveys the art of being yourself, of letting your inside beauty come out.

Bob: The center figures use parallelograms to suggest depth, moving out or in.

Henry: The depth captures the four breaths that we use to meditate—in and out, to bring your creativity to being.

Bob: We asked Shimá if such a special rug, which normally would be stored safely by the family rather than displayed, could be shown in this exhibit. She answered that the rug now calls the Kennedy Museum its home and that the rug now has the unique fire of this place—it demonstrates the ability to adapt to new homes and shows the life and resilience of both the weaving and the Kennedy Museum.

As such, Shimá thought it should be displayed for you to appreciate the creativity and resilience in your own life.