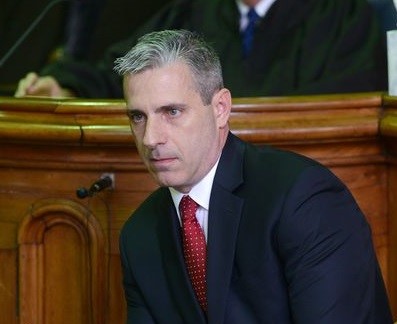 Ron Welch is a 1990 Graduate of Philo High School. He received a Bachelor of Arts from The Ohio State University in 1994. He received his Juris Doctorate from the University of Toledo College of Law in 1997.

He has served as a prosecutor for his entire 20 year legal career. Ron has been an assistant prosecutor in Muskingum County since 2005. Prior to that he was the Director of the Abuse Unit in Franklin County. During his career he has tried several hundred cases including murder, rape, major drug offenses, child abuse, domestic violence and human trafficking. Ron has worked in conjunction with child advocacy centers and child fatality review teams in developing protocols for the investigation and prosecution of child abuse. Cases Ron has prosecuted have been featured on Bill O’ Reilly, Fox and Friends and Dateline.

He has advised law enforcement at local, state and federal levels regarding the investigation of child abuse and sexual assault. He has provided training to law enforcement, medical professionals and public service attorneys. Training areas have included all aspects of prosecution. Ron regularly speaks at local colleges and universities, as well as local civic organizations on issues related to various aspects of the justice system.