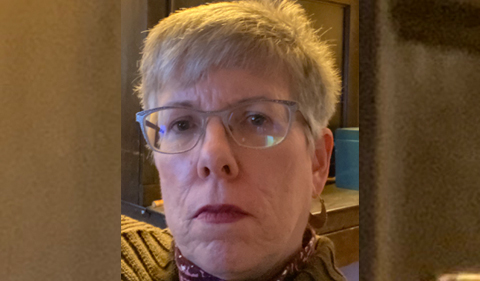 Haven is professor of English and teaches at Ohio University’s Zanesville campus. She collaborated on the book with Catherine Cormon, a head film curator at the EYE Film Museum in Amsterdam.

In their new book, Haven and Cormon put the spotlight on Max Linder, a French comedian who predated Charlie Chaplin and may have been the first big screen celebrity.

“American actress Florence Lawrence has, until lately, claimed the title of ‘first cinema celebrity,’ but new research by colleagues Andrew Shail and Georg Renken, as well as Linder’s daughter Maud, call Lawrence’s claim on this title into question,” says Haven.

But this movie star’s life story involves both comedy and tragedy, according to the book’s website.

Max Linder, born Gabriel Leuvielle in St. Loubes, France in 1883, started in films with the Pathe Brothers in Vincennes, just outside of Paris in 1905, making him one of the first film comedians that became world-renowned. In fact, there is evidence that Linder was the first screen celebrity to see his name in print. His comedy timing and gags (Linder started writing his own scenarios early on) have been copied and imitated by many of his followers, including Charlie Chaplin. Linder’s story is both a comedy and a tragedy. His meteoric rise to fame by 1907/8 hit a roadblock in 1914 with the onset of World War I, and was dealt a death blow by his attempts to revive his career in America and Austria. His marriage to a young wife was ill-fated and ill-timed, leading Linder to take the life of his wife and himself on the night of October 31, 1925, leaving a 16-month-old daughter behind, Maud, who would devote her life to restoring his film legacy.

“Linder came to America twice to try his hand at making films here,” Haven notes, “pretty much failing to achieve the level of popularity he possessed before World War I in France. The American dream escaped him, which proved to be an omen, for he was dead just three years after his departure from our shores.”

Haven received a Baker Fund award in 2017 to work on the book project. Endowed in 1961 by a gift of more than $612,000 from 1926 College of Arts & Sciences graduate Edwin L. Kennedy and his wife, Ruth, a 1930 graduate of the College of Education, The John C. Baker Fund was established to support faculty improvement and research efforts. Up to $12,000 is available for each award.

Haven’s previous books include A Comedian Sees the World, Syd Chaplin: A Biography, and Charlie Chaplin’s Little Tramp in America. She specializes in British and American modernist literature, the Beat poets, and silent film comedy, especially the work of Charlie and Syd Chaplin, Buster Keaton and Max Linder.