Please join Ohio University and the surrounding community in celebrating Women's History Month 2020! If you would like for your event to be added to the Women's History Month calendar, please fill out the following online form: https://ohio.campuslabs.com/engage/submitter/form/start/377484

Sponsored by the Women’s Center and Ohio University Libraries.

This program is a response to a call to action from By the People and the Library of Congress, to transcribe documents from throughout the women’s suffrage movement so that documents may be easily searched and accessed by contemporary readers.

100 Years of Change: An International Perspective

In honor of International Women's Day (March 8), a panel of women representing the Global South will address questions raised in the upcoming exhibit Ohio Women Vote: 100 Years of Change, which will be on display at the Southeast Ohio History Center beginning on March 16. Katherine Jellison of the Department of History will moderate, and refreshments will be served.

Co-Sponsored by the Women’s Center and Ohio University Libraries

Suffragists, and particularly those associated with the National Woman’s Party (in the U.S.) or the Pankhurst's (in the U.K.) were known for pageantry. Suffragists utilized suffrage sashes to identify their organizations, states, and as method of delivery for their colors, which symbolized reasons as to why women should have the vote and/or their organization affiliation. In this session, participants may modernize a suffrage sash to represent their affiliation with current political or social movements. We encourage you to wear your new sash to our film showing later in the evening of Suffragette! 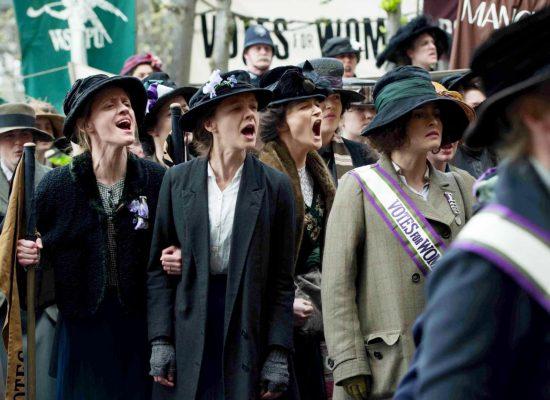 Maud (Carey Mulligan) is a working wife and mother whose life is forever changed when she is secretly recruited to join the U.K.’s growing suffragette movement. Galvanized by the outlaw fugitive Emmeline Pankhurst (Meryl Streep), Maud becomes an activist for the cause alongside women from all walks of life.

March 25, 6:00PM, Walter Rotunda. Women's Achievement Dinner. More information, including how to purchase tickets, can be found at: https://www.ohio.edu/womens-center/womens-achievement-dinner

In 1850-1851, the men of Ohio held a Constitutional Convention. They thought the 1802 Constitution needed updating.  Ohio women agreed whole-heartily.  They immediately convened four equal suffrage conventions in Columbiana, Morgan, and Morrow counties. They collected petitions containing 2,106 signatures from twelve counties praying that the words “white” and “male” be dropped from voter qualifications, and they submitted their petitions to the Constitutional Convention.  When the all-male vote was taken, the issue failed 73 to 7.  It was said that comments during discussion were “so low and obscene” they were not even recorded into the Proceedings.

Sixty-two years later, a spirit of reform was sweeping the country in reaction to the excesses of Big Business and harsh working conditions.  Progressive men wanted tools of direct democracy to counter these evils, while the daughters of the 1850 women were still waiting for their political equality. In 1912, Ohio men gaveled a Constitutional Convention into session. During five months, they deliberated 350 reforms and offered the [male] voters 42 amendments to approve at a September 3rd Special Election.  Amendment 23 would give Ohio women the right to vote in general elections for the first time.  To urge [male] voters to pass this amendment, Columbus suffragists invited women from all over Ohio to demonstrate in unity for their freedom.  On August 27, 1912, 5,000 women arrived in Columbus to march three miles in what the Columbus Citizen lauded as “Woman’s Suffrage Parade Greatest in State’s History.”

Hear Belle Coit Kelton, Vice Chair of the suffrage parade, tell how the Columbus’ Centennial Celebration helped their demonstration, how they borrowed tactics from the “militant” British suffragette movement, and how difficult it was to persuade 1.3 million Ohio [male] voters to give up centuries of privileged institutional patriarchy in just three months.

Leslie Blankenship earned a Bachelor of Science (Secondary) Education degree from Southwest Missouri State University in Springfield, Missouri, majoring in history and English with a minor in Political Science.  She came to Columbus in 1970 to study history in the Master’s Program at The Ohio State University where she first learned the story of the British suffragette movement.  She took the first Women’s History classes offered by OSU in 1972.  Along the way, she switched her pursuits to science and was employed by Chemical Abstracts Service (CAS) in 1974 as a Marketing Communications Writer, using her education skills to inform scientists about the usefulness of CAS’ publications and services.  Retiring after 37 years in 2012, she began pursuing local history full time.  She was a founding member in 1996 of the Friends of Freedom (an Underground Railroad research organization) and has served on the boards of the Columbus Historical Society (mid-1990s), the Franklinton Historical Society since 1998, and the Ohio Local History Alliance 2013-2018.  She has been a Docent at the Kelton House Museum and Garden since 1990 where she first discovered the story of Belle Coit Kelton and the 1912 Ohio Woman Suffrage parade.