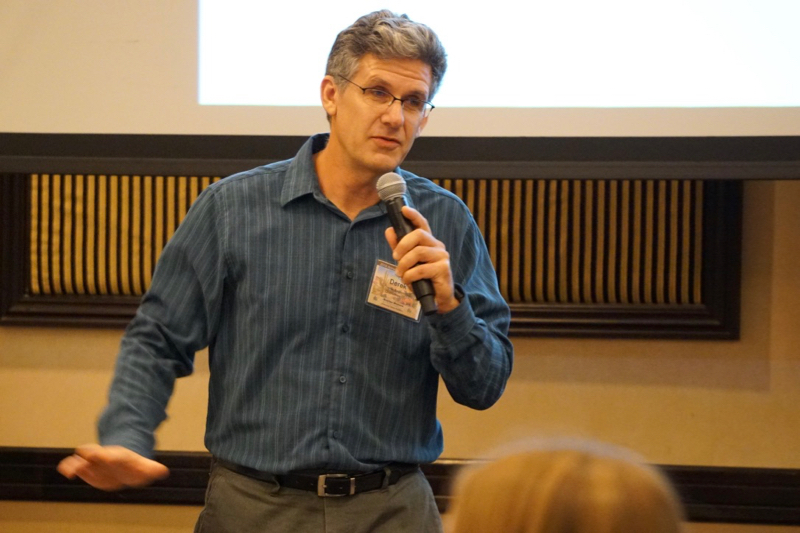 An associate professor at Ohio University’s Voinovich School of Leadership and Public Affairs is collaborating with tribal governments, government agencies, and other researchers to help tribal communities prepare for climate change.

Derek Kauneckis provides expertise in water and community resilience to a multidisciplinary, multicultural team that has spent the last four years working on the Native Waters on Arid Lands project, funded by the U.S. Department of Agriculture.

“My role is to help create a better framework for integrating climate science into actual decision making by both farmers and tribal governments,” said Kauneckis, a co-principal investigator on the project.

The project is focused on the western United States and funded by a five-year, $4.5 million grant from the USDA’s National Institute of Food and Agriculture.  Researchers at the University of Nevada, University of Arizona, Utah State University, Ohio University, and the U.S. Geological Survey work with representatives of seven tribal governments, faculty and students from tribal land-grant colleges, and American Indian scientists and community members working in water, culture, education and agriculture. The goal is to develop strategies and tactics for sustainable agriculture and water management in the context of climate change.

“Water is a precious natural resource and also has profound cultural and spiritual significance to tribal peoples," John Phillips, executive director of First Americans Land-Grant Consortium (FALCON), a professional association of tribal colleges, said in a previous article about the grant. “This program will help Native American communities in the Great Basin and southwest region carry on their historical role as strong environmental stewards for the Earth and its natural resources.”

The tribes have led the discussion, with the investigators listening closely to understand their tribal partners’ needs. Those discussions informed the research and its application, such as analyzing climate adaptation research Kauneckis said.

“We found what seems to work best in terms of how they framed their concerns and how they include both scientific and indigenous knowledge,” Kauneckis said.

That combination of technology and tradition is important -- not only to make the project relevant, but also because tribal peoples bring so much knowledge to the table, Kauneckis said.

“If you take a more dynamic view and look at the history of these tribal communities, most of them have endured pretty dramatic change, so it would be hard to make the case they don’t have some inherent resiliency,” Kauneckis said.