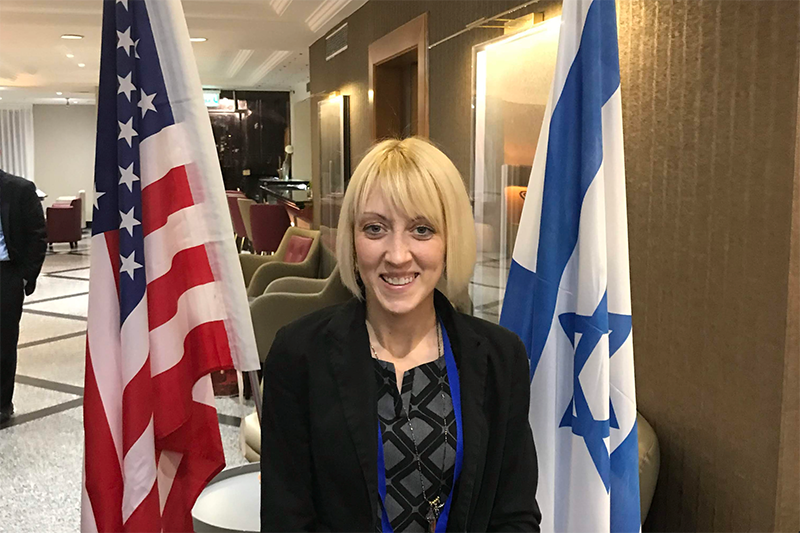 As strategic advisor to the executive director at the International City/County Management Association, Amber Snowden has found a career that combines her love of public policy and local government.

“I’m able to be involved in decisions that are made at the national level,” she said. “But I’m also able to help local government leaders build the tools and skills they need to serve their communities.”

Snowden got her first taste of public administration work as an Ohio University undergraduate studying political science. Her advisor connected her to the Voinovich School of Leadership and Public Affairs, where Snowden spent a summer working as an Undergraduate Research Scholar.

“I spent a lot of time reading through the notes of board meeting for community foundations and learning a lot about what factors motivated their decisions,” she said.

After graduating from Ohio University in 2006, Snowden started looking at graduate programs, with the goal of eventually working for a nonprofit or community foundation. The Voinovich School’s Master of Public Administration program naturally came to mind.

As an MPA candidate she interned for the Institute for Local Government Administration and Rural Development, which is now the Voinovich School. She worked on real life projects and said she most appreciated the program’s practical nature.

“The facilitation skills I learned, I use to this day,” Snowden said.

Snowden graduated in 2009 and, like many others graduating during the Great Recession, she struggled to find work immediately. She moved to Greensboro, North Carolina, where she spent a year working for her uncle in the Guilford County Attorney’s office.

In 2014, while working as the public information specialist for Mecklenburg County, Snowden was assigned as staff liaison to ICMA. Snowden was tasked with helping the group plan its annual conference, which was held that year in Charlotte, North Carolina.

While working with ICMA, she learned the organization was looking for a communications and projects manager.

“I spoke to one of their staff members and the next thing I knew I was interviewing in the convention center during the conference,” Snowden said.

She soon relocated to Washington, D.C. to work for ICMA, where she has been for the last five years. One of her proudest achievements is being the primary author of ICMA’s new strategic plan.

In the midst of the COVID-19 pandemic, ICMA is providing a number of services to its members – city and county managers and other local government employees – to help them better serve their communities. Snowden is a member of ICMA’s internal COVID-19 action team.

“We’ve been working to help our local governments understand the provisions in the CARE [Coronavirus Aid, Relief and Economic Security] Act they can take advantage of,” she said.

Snowden authored a widely downloaded fact sheet outlining the elements of the CARE Act relevant to local governments. She is also utilizing her Voinovich School connections during this time.

“There’s a group of mayors from small towns that are meeting and trying to wrap their heads around how to deal with the pandemic and recovery,” Snowden said. “I’m actually working to connect that group to the Voinovich School and to some of the resources there.”

She is grateful for her continued relationship with the Voinovich School.

“My advice to people who are in the MPA program is, don’t leave it behind,” Snowden said. “Stay connected. Because I kept that connection, I’m able to connect some of the people where I’m from with resources that are going to help them recover.”