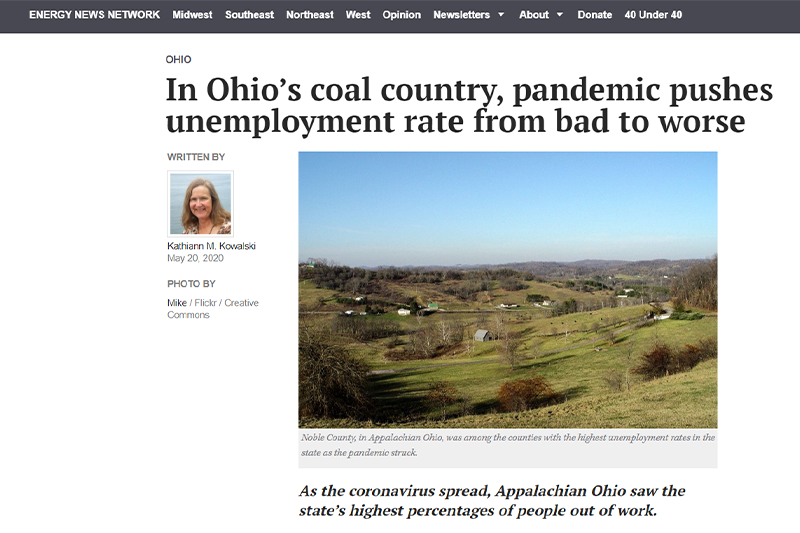 Dr. Gilbert Michaud, assistant professor of practice at Ohio University’s Voinovich School of Leadership and Public Affairs, was recently interviewed by Energy News Network about the impact of the COVID-19 health pandemic on already-high unemployment rates in coal communities in Appalachian Ohio.

In the article, “In Ohio’s coal country, pandemic pushes unemployment rate from bad to worse,” author Kathiann M. Kowalski explains how coal communities in Appalachian Ohio that were already struggling have been dealt a further blow by the pandemic.

U.S. coal production has decreased by roughly 30% since 2014, as domestic and international demand for coal has declined. This has left many coal communities with high rates of unemployment that soared even higher when businesses were closed to prevent the spread of COVID-19. In Appalachian Ohio, which already had Ohio’s highest unemployment figures, saw rates as high as 12% in some counties, due in part to the number of jobs in the area that cannot be performed remotely.

The article also notes how the closure of coal-fired power plants leads to not only job losses directly at a plant, but also jobs losses in other regional industries. To illustrate, a 2019 study in Regional Science Policy & Practice by Michaud and his Voinovich School colleagues, Drs. Jason Jolley and Christelle Khalaf, as well as Austin Sandler of the University of Maryland, found that the closure of two plants in Adams County, Ohio cost more than 1,100 jobs — 370 at the plant and about 760 in other businesses due to supply chain and related spending. The losses also cost local governments millions in tax revenues, which would have supported education and children’s services, emergency medical services, and others.

The article quotes several sources who call for increased public investment in coal communities to help them become more resilient. Among other economic development strategies, those investments could include support for renewable energy and related job training.

Michaud noted that Ohio’s southwestern Appalachian counties are particularly well-suited for solar energy projects compared to many other areas served by PJM Interconnection, the regional transmission organization that coordinates the electric grid in 13 U.S. states and the District of Columbia. All of Ohio is served by PJM. Several renewable energy projects are already planned for the area, which will help with rural community economic development.