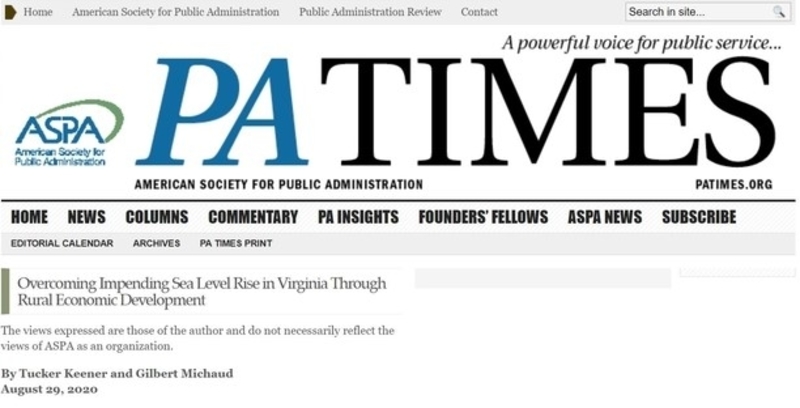 In the article, “Overcoming Impending Sea Level Rise in Virginia Through Rural Economic Development,” Michaud and co-author Tucker Keener, an undergraduate student in political science and sociology at Christopher Newport University, note several strategies communities are using to cope with rising sea levels as a result of global warming.

In some coastal and other at-risk areas, local governments and organizations have built sea walls to prevent erosion and protect communities. Elsewhere, such as California, states have combined compensation with eminent domain, which is government acquisition of private land, to move people inland.

“Certain economic incentives, such as partial student loan forgiveness, have sometimes been employed to nudge populations to targeted areas, such as rural and depressed counties,” Michaud and Keener write.

For example, the Tobacco Region Revitalization Commission of Virginia offers help with student debt repayment to attract people to Virginia’s formerly tobacco-dependent areas. Funds are given to recent college graduates willing to relocate and work in-demand jobs in fields such as education and healthcare. The state also offers other regional development programs to areas facing unemployment and economic hardships.

“While these incentive programs are not specific to potential victims of sea level rise, they represent already existing strategies that could be leveraged to encourage folks living in coastal areas to relocate to other parts of the state,” Michaud and Keener write.

The authors also note that many consider these solutions to be temporary, and strategies targeting sea level rise itself may be needed. Fortunately, they state, climate change is starting to be addressed more prominently at all levels of the U.S. government.

“Beyond the federal government, states should also start thinking about ways to be mindful of, and take action on, zero-carbon emissions strategies for electricity generation and transportation in the face of temperature rise, especially while there is momentum and a heightened focus on climate change issues,” Michaud and Keener write.