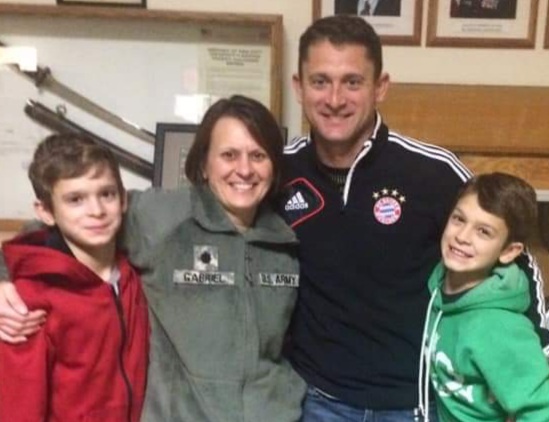 Three months ago, when Joe “Gabe” Gabriel, the Government and Public Affairs Director of the Ohio National Guard, sat down with his team to decide how best to communicate the Guard’s COVID-19 pandemic response, he was reminded of some of the values emphasized in his classes at Ohio University’s Voinovich School of Leadership and Public Affairs.

“The biggest ones were transparency and accountability,” said Gabriel, a 2020 graduate of the Voinovich School Executive MPA program. “We wanted to tell people when Guard members are going into their community, what goals they will be fulfilling and what partners they’re working with.”

The COVID-19 pandemic has presented the members of the Guard with the unique experience of working in their own communities. State active duty members have been volunteering in 12 of Ohio’s largest food banks, replacing at-risk elderly workers.

“We’re providing [the food banks] with the logistics and personnel to continue running with increased demand,” he said. “The need for food has become pretty critical, so the Guard wants to help make sure that everyone in the state of Ohio is able to have access to it.”

Engineers in the Guard have been working with the Department of Health and Administrative Services to increase medical capacity in hospitals across the state.

“Our boss, General Harris, continues to reinforce the fact that these are Ohioans serving other Ohioans,” Gabriel said. “We’re all across the state, we’re everybody’s neighbor.”

Although he didn’t sign up for the program with a global pandemic in mind, Gabriel said that his education from the Voinovich School is more applicable now than ever.

“It was truly in line with what I do,” he said. “I’m really blessed to be one of the few people I know, other than doctors and lawyers, that are actually doing something within their major.”

In 2017, after 29 years serving in the US Army and National Guard, Gabriel decided to retire. While planning his transition into civilian life, he began to notice a pattern among his friends.

“I started looking around, and everybody I knew was getting an MBA,” He said. “And I just really wasn’t interested in going into business.”

Gabriel knew he wanted to stay in the public sector, and when he heard about the Voinovich School’s Executive Master of Public Administration program he was immediately intrigued.

“The program closely aligned with what I wanted to do,” Gabriel said. “And going back to my alma mater was an easy choice.”

Gabriel graduated from OHIO in 1992 with dual bachelor’s degrees in political science and history.

Beside the Executive MPA program’s content, Gabriel was attracted to its flexible schedule, as his wife was also in the process of earning her master’s degree in social work and counseling.

“We’ve got two teenage boys, so somebody had to be home to get people to soccer practice,” Gabriel said.

The Executive MPA program is designed to accommodate working professionals. Candidates earn their degrees in two years through a combination of online work and 20 Saturday classes at Ohio University’s Dublin Campus in central Ohio.

“Most of the time I could sit on my own on a Saturday or Sunday morning and get a lot of work done,” Gabriel said. “That flexibility was really good for the family schedule.”

Gabriel started his current job with the National Guard in early 2019. As government and public affairs director, he is in charge of communicating the Guard’s message, both to the Ohio general public and the government, stakeholders and businesses.

“It’s an engagement that really starts at the local community level and goes all the way up to the national government,” he said. “We’re being transparent and objective about the Guard’s role and demonstrating its value to all of these audiences consistently.”

Gabriel said that his classes particularly helped him prepare for the public affairs side of his job, which was unfamiliar territory.

“From the outside it seems like just talking to the press,” he said, “But I needed to understand what the video and print media can provide the Guard in terms of telling our story.”

Gabriel classes have helped him create a comfortable and efficient working environment with his staff. They emphasized civilian leadership values he said sometimes aren’t reinforced well in the military.

“What I learned from the Voinovich School is a kind of patience, the ability to listen, the ability to understand that people at the tactical street level need to be able to do their job,” he said.

Gabriel recommends that anyone interested in working in government check out the Voinovich School’s MPA program.

“I learned a lot,” he said. “I didn’t just take it to put a couple letters behind my name, I really needed what the Voinovich School was teaching to be successful in this job.”