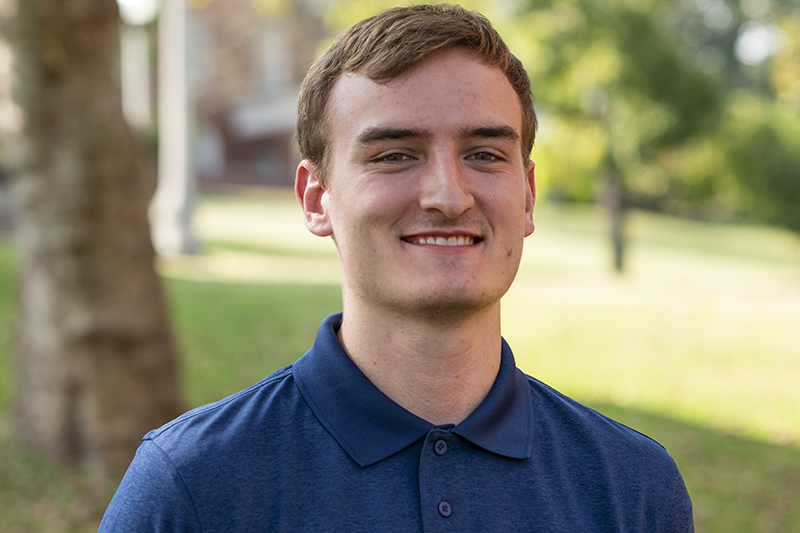 A few months later Campbell was collaborating with Burke as IEDC’s newest intern.

“It’s kind of cool,” Campbell said. “Because now I’ve worked with her for almost 12 months at this point.”

Campbell is the latest recipient of what is now a decade long collaboration between IEDC and the Voinovich School.

IEDC is the world’s largest membership organization for economic developers, with more than 5,000 members. The nonprofit, nonpartisan organization provides its members with research resources, professional development opportunities and more.

The Jeffrey A. Finkle Ohio University Economic Development Internship was established by IEDC in 2011 to honor CEO Jeffrey Finkle, an OHIO alumnus, for 25 years of leadership. Every year an undergraduate or graduate student affiliated with the Voinovich School is selected to work at IEDC’s headquarters in D.C. for a paid internship in economic development.

Campbell joined the Voinovich School as an Undergraduate Research Scholar in August 2019. He put his Geographic Information Science certificate to use working with Voinovich School GIS/Data Specialist Matt Trainer and Jackie Kloepfer, former research associate, as a GIS research specialist and was grateful to find a student position that gave him professional connections and experience.

“[I was] getting job experience in a different setting than something that’s just a part-time minimum wage job,” he said. “It’s a lot different than working at a dining hall … it just feels like a ‘real job’ in a lot of ways, so I think there are a lot of benefits that came out of that for me personally.”

Campbell was excited about the prospect of spending the summer in Washington, DC, but shortly after being awarded the internship, the coronavirus pandemic struck the United States. Campbell was offered the chance to conduct the 10-week internship virtually.

“This was IEDC’s first experience, same as mine, with a virtual internship,” Campbell said. “I think that Jeff and the entire staff have done a great job with making their interns feel like they were a part of the team from very early on.”

Finkle met with the IEDC’s interns for virtual lunches and made a point of being available for questions. “He talked to all of us to see what our interests are, what we’re working on … Jeff has been with IEDC for over 30 years, so just asking him stuff about the history of IEDC and the history of his own personal career [was valuable],” Campbell said.

As an intern Campbell worked in the Knowledge Management and Development Department, conducting research to update IEDC’s course training manual and writing for IEDC’s publications. At the end of July, when his 10 weeks were up, Campbell was able to extend his internship to the end of the summer. By August, however, Campbell wasn’t quite ready to leave the organization, nor was IEDC ready to get rid of him: Campbell’s internship was extended two more times, into the fall and spring of his senior year.

“I’m kind of working in three separate timelines, and my responsibilities have shifted here and there,” Campbell said. “Most of the work now is tailored toward recovering from COVID and the economic downfalls of what has happened over the last year.”

Campbell is staying on with IEDC as a Knowledge Management and Development Fellow after he graduates in May. “[Colton’s] level of thought, his research skills, his writing skills, have proven to be so strong that when he had the opportunity to keep him on in a slightly different status we did so immediately,” Finkle said. “There was no question that we could use Colton. He wanted additional work, we needed somebody with his determination and drive. Colton’s been a rockstar for us.”

A recent IEDC endowment has ensured that the internship will continue for years to come.

“We’ve been very fortunate for the Colton Campbells of the world and the Hannah Burkes before,” Finkle said. “They have just done a great job for us, and it says a lot about Ohio University and the quality of students that are coming out of there.”

After a year of work, Campbell hopes to have the chance to meet his coworkers in person sometime soon.

“[I just want to] reiterate my thanks and gratitude for Jeff and everyone at IEDC and also the people that I worked with at the Voinovich School,” he said. “It’s just a lot of gratitude that I have.”