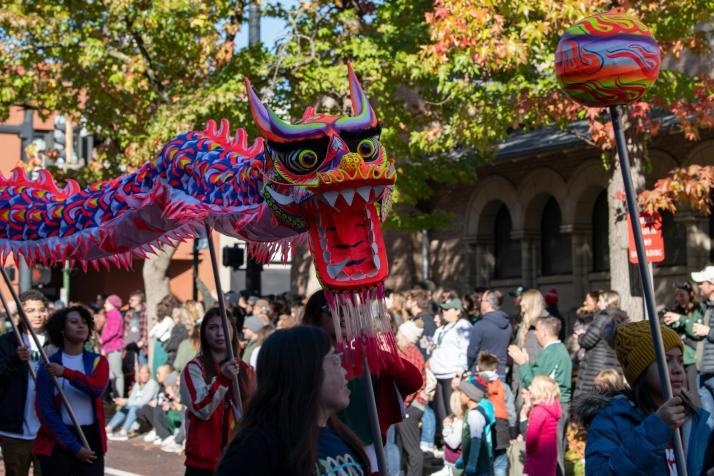 The AAAA, AAPISU and AAPI Lead marched in the homecoming parade with a Chinese dragon for the second time this year.
Maya Meade

The colorful dragon hoisted by members of the Athens Asian American Alliance (AAAA), Asian-American Pacific Islander Student Union (AAPISU), and AAPI-Lead made its second appearance at the Ohio University homecoming parade this year. The three organizations work together in organizing their communities to ensure a great turnout at the parade.

The AAAA formed during the COVID-19 pandemic as a result of the rise in hate crimes toward Asian Americans. Since its creation in May 2021, the AAAA has served as an educational tool, awareness builder, and bridge between the Athens and Ohio University communities.

“Why were our kids always standing by the side, looking, not part of the parade?” said Yi-Ting Wang, vice president of AAAA and graduate writing professional tutor for the Academic Achievement Center at OU. “[Marching in the parade] definitely helped people reimagine the university community …  I felt like if we could put ourselves there, we could add some diversity in this whole celebration.”

And they did just that. AAAA and other community leaders decided to participate in the parade and borrowed the dragon from the Columbus Chinese Academy this year. The groups centered their theme around OU’s cherry blossoms, to fit the general theme of ‘Bobcat Pride.’

Fan Jiang, the president of the AAAA, felt the urgency to starting this organization after her fifth grade son received a death threat in an email from another student.

“Because there was this heightened anti-Asian sentiment nationwide at that time, we just felt very scared,” Jiang says. “People just don't automatically understand how Asian Americans felt at that specific time, and it's just hard for them to relate to our feelings. So we really have to advocate for ourselves.”

Jiang, along with Wang, and Noriko Kantake, AAAA treasurer, have dedicated much of their time since spring of 2021 to the organization. Their mission is to advocate for the needs of the AAPI community at OU, Athens and surrounding areas. To do this, the organization has partnered with the students in AAPISU at OU as well as many community partners.

This year, AAAA provided spring and summer programming to the Athens Community Center including STEM enrichment and cultural activities. Last summer they collaborated with Rural Action and Community Food Initiatives to host an Asian vegetable workshop and bring variety to the choices that people have for vegetables and produce. By providing these community services, they hope to be more visible as Asian Americans in the community.

The organization participates in legislative advocacy as well. Youth representatives went to the Ohio Statehouse and gave testimony against HB 322 and HB 327 to advocate for honesty in education and to show solidarity. The hope is that all sectors of the Asian American community stand together to promote diversity and cultural awareness.

According to Wang, through active participation, advocacy, and collaboration with partners, the AAAA serves to “to remind people ‘Hey, there are actually a lot of Asian elements in your university life,’ so that people are just aware of things that seem to be so invisible.”