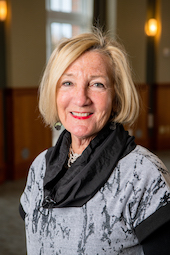 Upon graduation from Ohio University, she began a career at Procter & Gamble in management, progressing through various functional groups including purchasing, fats and oils trading, and advertising. Having spent a year traveling throughout Europe before starting her career, she decided to leave P&G after 11 years to join a large Dutch company in Holland, Akzo Nobel.  Various worldwide  P&L responsibilities resulted in the position of Business Unit Manager of a $2billion unit with manufacturing in 22 countries.

The Viehweger family left Holland after 15 years living in a 1680 Amsterdam canal house, with Peggy Viehweger taking the position of President of Phosphorus Chemicals, an Akzo company headquartered in New York.  When Ripplewood, a private equity firm, bought the business, Viehweger became an owner and CEO, renaming the business Supresta.  Three years later the business was sold to ICL, Israel.

Viehweger has served as advisor to consulting firms and on the Foundation Board of Ohio University, as well as the Board of Trusees.  Her family has many Ohio U connections: her grandfather, Don Peden, was a coach and athletic director and one of the founders of the MAC,  both parents were Ohio University graduates, as is one sister, and one daughter. She resides with her family in Cincinnati and Paris.  She’s an avid walker and traveler.