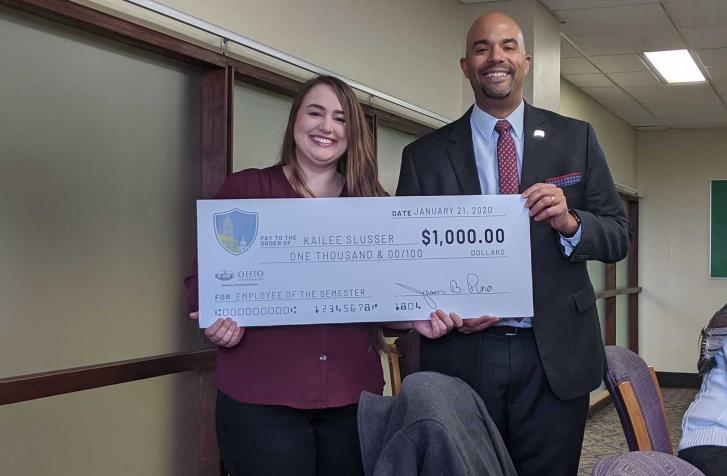 During what the Student Affairs Communication and Marketing (SACM) office believed to be just an early Monday morning meeting, Chief of Staff Megan Vogel and Vice President for Student Affairs Jason Pina made a surprise visit to the conference room where the SACM staff was planning for the upcoming semester.

After a brief introduction, Pina went on to reveal that Design and Web/UX Manager Kailee Slusser had been awarded Employee of the Semester by the Division of Student Affairs. He and Vogel noted that Slusser received an overwhelming number of support letters from both students and staff across the division.

Beyond what Pina said was “unprecedented support” by her colleagues recognizing her hard work, Slusser’s project with the Cats’ Cupboard food pantry was mentioned. Marketing materials created by Slusser were presented at a conference in Chicago, leading to an incredible gift to support the initiatives of DOSA that help students in need.

“These gifts, which we are honored to receive, are because of us being able to tell our story,” said Pina. Slusser’s design depicted the work the division is doing to ensure students have all the resources they need to graduate successfully, including the newly renovated Cats’ Cupboard, which Slusser also produced signage for. The on-campus food pantry saw over 400 students visit last semester, and the division and departments across the University donated hundreds of pounds of food.

Beyond Slusser’s design work, she also led 6 web migrations across the division last semester as well as mentored and oversaw the work of members of the SACM student design team. 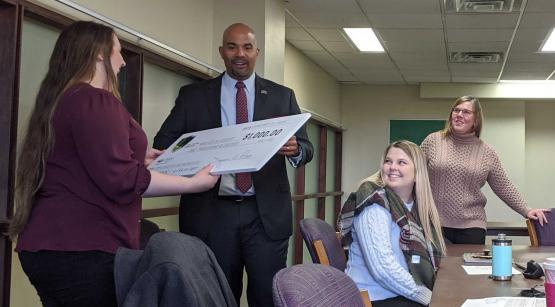 When asked what she was going to do with the award money, Slusser explained that though the cliché response is to go to Disneyworld, she will actually be visiting Disneyland this summer. She thanked the SACM team for the support and expressed how grateful she is to be a part of their office.

The division appreciates the hard work and dedication of all of its employees, and looks forward to recognizing those who go above and beyond each semester through its Employee of the Semester program.