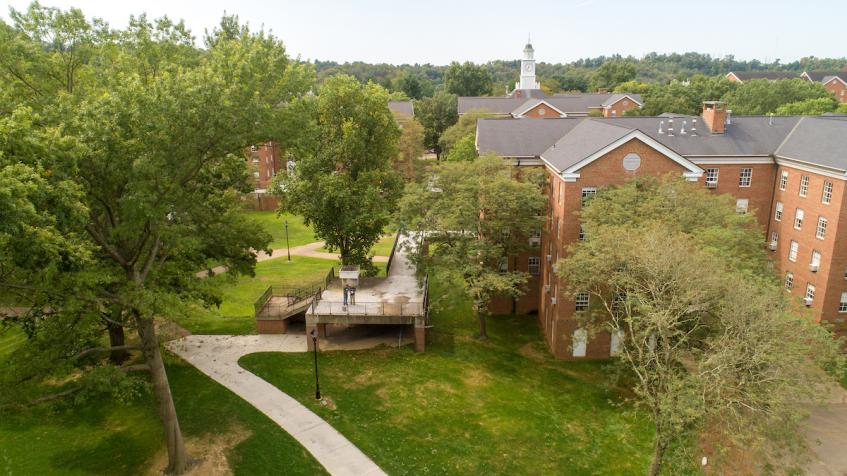 When Frank Trocchia and his son stayed overnight in Dougan Hall during the 2019 Homecoming weekend, he could see how much Ohio University had changed from his days as a resident assistant. As he remembered “being a support and liaison for the residents on [his] floor and the University,” he saw that some buildings were new, while just a few bricks remained of those that have been demolished in more recent years. The railroad track between Morton and the “front four” was gone, and now the residence halls had microwaves along with many other new amenities. Looking back, Trocchia recalled “I always felt terrible when I was doing rounds and found a violation that needed [to be] handled. Back then we weren't allowed to have things like microwaves in the [residence hall] rooms, but everyone had them.” As he and his son enjoyed their stay, he saw that even though campus has adapted for a new generation of Bobcats, “So much remains the same, and it [still] feels like home.”

While Trocchia had visited the Athens Campus on previous Homecoming Saturdays, this time he wanted to stay for the whole weekend. When he found that all the nearby hotels were fully booked, he took the opportunity to stay on campus instead. “Dougan has a lot of memories for me, and not just because I was an RA,” said Trocchia. “In 1989, I arrived a few weeks early before the fall quarter because I was accepted as a member of the Marching 110. During band camp, where did we stay? Dougan. My first night at Ohio University was in Dougan. I can remember the first morning before camp started, all of the freshman and incoming marching band members met outside on the catwalk with the director, Mr. Socciarelli. He gave a great pep talk and really fired me up.”

Nostalgia and revived memories are just one reason the University offers on-campus guest housing during select weekends. This option is not limited to those who have already spent a fair share of their time in an OHIO residence hall though. On select weekends, family members and others who want to join the Bobcat experience can spend a night or two in the halls.

This affordable, convenient and centrally-located lodging option lets visitors spend more time making memories with their favorite Bobcats. Guests can choose from a single or double room, which comes with beds, linens, pillows, towels, a shared bathroom, refrigerator and yes, a microwave. The rooms are on South Green, which means other parts of campus and uptown are accessible via sidewalks, nearby parking lots and campus shuttles.

Staying in the heart of the Homecoming action was another big plus for Trocchia and his son. They were able to eat at Nelson Dining Court, which his son thought was fantastic, visit all the greens and shop uptown. “Staying in Dougan was a great way for me to have a room, show off to my kid, and not be so tired from driving . . . In the end, my son was impressed, and I know he will call one of these residence halls home [at Ohio University] in just a few years.”