Welcome to Ohio University Southern's online art gallery. Discover Our Selection Of Artworks From Recognized Artists from around the Ohio University community. Please see the galleries below and learn more about each of our artists and their work.

Simone Renee Spruce was born in Toledo, Ohio in 1960. Simone works predominantly in the medium of graphite pencil, but also works in painting, installation, theater and poetry. She has been a teaching artist for 40 years to various groups which include K-12, At-Risk Youth, Adults, Seniors and the Developmentally Disabled. Her art credentials also include curating and jurying exhibitions in 2D and 3D in various mediums; panelist on various private and grant-making institutions to the arts, an art consultant and grant writer. Simone completed her BA in Art at Findlay University in Findlay, Ohio in 1982. She received her MFA at Vermont College of Fine Arts in 2017. She has participated in solo and group exhibitions in the Southeast, Midwest, and Northeast. Her work is in both public and private collections. She lives and works in Toledo, Ohio.

This exhibit seeks to increase the awareness of the public on how these African-American women singers used their politically charged music to fight for civil and human justice.

A native and near lifelong resident of Appalachia, my work focuses on her people. Inventive, creative, industrious, and beautiful. My journey into photographic art began with a desire to be a rock and roll drummer. Unfortunately, my musical skills don’t lend themselves to my being the next Peter Criss or Bun E Carlos, though I strive for that limit pushing, boundary stretching edge in my images. Often, I choose unconventional locations, socially unacceptable content, uncomfortable topics, and marginalized models to bring my images to life. Many times, I refer to my ideas as a “fuzzy vision”, and this is the only theme I have in mind. Bringing that fuzzy vision into focus is a wonderful journey, and one I plan to continue for many more years, and many more adventures.

This work shows the death of Ophelia, a scene from Shakespeare’s play Hamlet. Many Victorian painters like Millais used Shakespeare’s plays as inspiration. Hamlet murders Ophelia’s father, and she is so upset she falls into a stream and drowns. The flowers she is holding were chosen for their meanings. The poppies symbolize death.

The background was painted from real life. When this picture was made, it was thought to be one of the most accurate studies of nature ever painted. Artist, poet and model Elizabeth Siddall posed for Ophelia in a bath of water at Millais's studio. The water was meant to be kept warm by lamps underneath, but these went out, and she became ill after spending so long in cold water.

Millais’ work is indelible. This image of Ophelia has been imprinted on the minds of so many people, it is often recognized, even when the reference, Hamlet, is unknown or forgotten. Over the years, Ophelia has inspired many other works, though none as well known.

A friend remarked about the similarity of one of my images to the original, and it started my mind turning. While it was not a conscious effort, and different in many ways, I also saw the similarities. As I continued to build a body of work around an adjacent theme, I began to see the Ophelia reference in many of the images. Over time, I have managed to put my own stamp on these images, while continuing to pay homage to the original.

I hope you enjoy my interpretation of the original, some century and a half later.

I make work that explores the dilemma that Appalachian people face when dealing with decolonization. Appalachia has been utilized for its resources and people for several decades; from coal to steel, industry has settled comfortably in a place where people value hard work.

Tradition exists through many forms in Appalachian life. From a passing down of crochet, to generational career paths in steel mills, Appalachians have been ingrained with a mentality of tradition that has, and continues to work its way through generations. But what happens when those traditions end? In a region with an unyielding belief in family and locational loyalty, the overall inveterate disposition is that “my grandfather did it, my father does it, and I’ll do it next.” But when those traditions begin to disappear, it rocks that loyalty to its very foundation. This preservation of a seemingly outdated mentality centered on industry and tradition has made them who they are, but at what cost? Is it time to move on, or is this way of life worth preserving?

Working with traditional Appalachian materials and techniques such as crocheted yarn, sewn fabric, and cardboard moving boxes, my work forms an environment where tradition collides with impermanence in a materialization of a cultural phenomenon. Meticulously made “precious” objects such as fabric canaries and quilt-work signs, allow their ominous messages to work alongside the transient existence of damaged cardboard and its symbolism of impermanence and relocation, to become a visual representation of dilemma. I’ve created a space for the viewer to experience shifts in emotion. Whether it be through the anxiously made statements and foreboding imagery, or the sentimentality of the carefully sewn elements. Either way, my goal is to connect the viewer to the quandary of the Appalachian person. Industrialization has been existing as a tradition within Appalachian culture, but deindustrialization has struck the region. Now the question is, do the people fight for or against it? 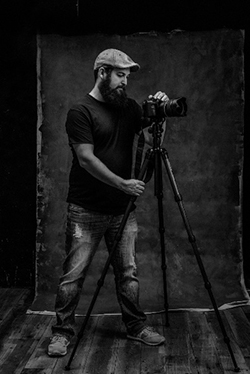 My name is Jesse Thornton, native of Point Pleasant and current resident of Huntington, West Virginia. I wasn’t born with a camera in hand. I didn’t think about photography growing up. I suppose it still did not occur to me take pictures even when cell phone cameras became ubiquitous. That started to change by 2014 when I was inspired to pick up a camera as a simple excuse to get out of my comfort zone, travel more and document my journeys.

I quickly became obsessive about the art of photography and addicted to chasing down the adventures that were born from that obsession. I’ve learned there's nothing more gratifying to me than finding that rarely glimpsed scenic vista painted with warm, late evening light; or the forgotten night sky untouched by artificial lights. I've seen quite a bit of the country through my camera, but nothing makes me more inspired and motivated than capturing my home state of West Virginia.

Here, we have some of the richest and most diverse scenery in the country, furnishing different looks throughout the four seasons of the year. Influenced by fantasy and science, my aim is to capture the surreal nature of these landscapes in hopes of encouraging others to discover (or rediscover as I have) the beauty of West Virginia. This is something I must do; it’s in my bones now and your purchase helps to fuel my passion!