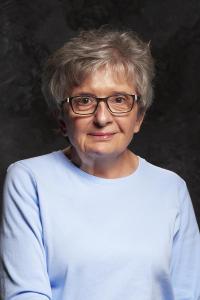 Professor Marcy Nighswander has been teaching photojournalism at Ohio University’s School of Visual Communication since 1995.

Prior to teaching at OHIO, she was a staff photographer at The Associated Press Washington, D.C., bureau for seven years. While there, she was one of a team of AP photographers that won a Pulitzer Prize for Feature Photography for their coverage of the 1992 presidential campaign.

Nighswander is a graduate of Bowling Green State University in Ohio. Her first job was as the only photographer at The Review Times in Fostoria, Ohio. She has also worked for 10 years on the photo staff of The Beacon Journal in Akron, Ohio, and for three years at The Cincinnati Post. In 1977 she was named the Ohio News Photographer of the Year, the first woman so honored.

She has traveled to more than 30 countries while covering the White House during the presidential administrations of Ronald Reagan, George H. W. Bush and Bill Clinton. Her work has been published in hundreds of magazines, newspapers and books, including four volumes of National Press Photographers Association’s annuals, The Best of Photojournalism.

Personal photography projects are still of great interest to her, and one of the reasons she decided to go into teaching. But Nighswander’s greatest satisfaction today is preparing students to be leaders in photojournalism, and she delights in their success.