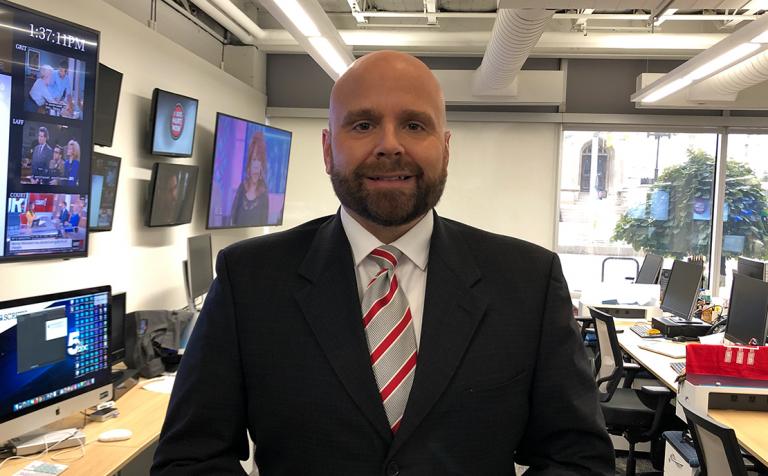 The award will be given during RTNDA’s Edward R. Murrow Awards Gala on October 14, 2019 at Gotham Hall in New York City.

Walsh, 47, works as an Investigative Reporter for WEWS News 5, the ABC affiliate, in Cleveland, OH. He teamed up with News 5 Chief Photographer Andy Sugden for a story called “The Turn.” The report highlighted a Cleveland suburban golf program that helps people with physical challenges to play the game of golf. It’s a one-of-a-kind charity that uses para-mobile devices to help people get around the course, swing their clubs, and have a ton of fun.

“With every good story comes amazing people and that’s what I found,” said Walsh. “The way the staff and volunteers help the participants feel ‘normal again’ is so inspiring that, even though sports reporting isn’t my everyday job, I had to cover this,” Walsh explained. “The golfers are so real and talked to us so openly about their lives that I knew their messages would ring loudly in Northeast Ohio and across the country.”

Walsh is no stranger to sports coverage. During his career he’s covered several NBA Finals series, the World Series, the Super Bowl, and many professional playoff games. Plus, he was the Captain of the Meadville, PA Bulldog Basketball team during the 1990-1991 season. He got his start in professional journalism working as a Student Correspondent for The Meadville Tribune.

Walsh is a 9-time Emmy Award winning journalist who’s also collected 6 Regional Edward R. Murrow Awards and 18 Associated Press Awards during his career that spans more than two decades as a reporter, anchor, and producer in television newsrooms that span the U.S.

While Walsh is now known for investigative reports that cover government fraud and consumer issues, he and Sugden found out about The Turn program while covering a totally different story. “You never know when that life-changing story will hit you,” said Walsh. “I want to thank my station management team for thinking outside of the box and allowing an investigative reporter to cover a memorable and meaningful sports feature. The experience will stay with me for the rest of my life,” said Walsh.