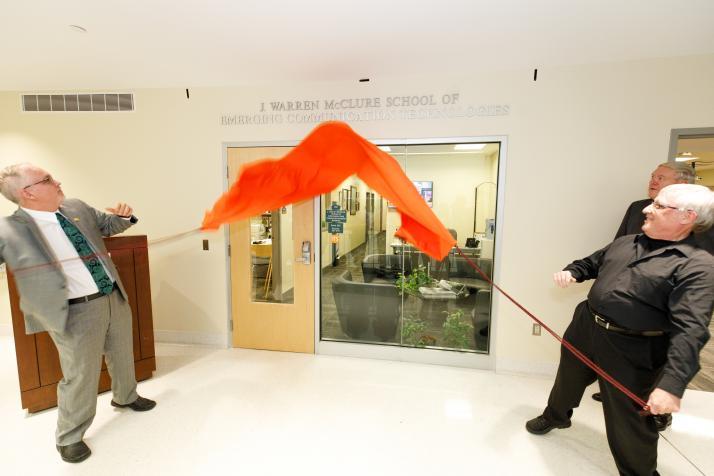 Athens, OH - On August 28, on the third floor of the Schoonover Center for Communication, faculty, staff, alumni and students gathered around an orange banner. Guests posed for photos holding rubber ducks—whimsical party favors chosen to commemorate the unveiling of a new name for one of the five schools in the Scripps College of Communication.

Over the summer, the J. Warren McClure School of Information and Telecommunication Systems (ITS) combined with the Game Research and Immersive Design (GRID) Lab to form the J. Warren McClure School of Emerging Communication Technologies. The school’s new name, on the sign above its office suite, had been hidden behind the orange banner since classes started August 26.

“I think about the direction that higher education is moving today,” Nellis said. “We are at a pivot point and this school represents, in part, the digital university of the future.”

During his introductory remarks, Titsworth said the school’s new name reflects its position as a leading training ground in the field of augmented and virtual realities and the networks that are increasingly necessary to the content.

“You can’t have great compelling content on the scale that we know consumers want and that we want to use in educational and other training arenas without having the network that will allow those things,” Titsworth said.

Before his own remarks, Kruse read a congratulatory statement from Jim McClure, whose father J. Warren McClure provided the original endowment for the school. Kruse went on to explain what he looks forward to about the new endeavor.

“We always try to do stuff that is not run-of-the-mill, that is difficult, that takes imagination,” Kruse said. “There isn’t anything harder than to take high-volume virtual reality content and deliver it in a timely fashion so that people don’t bump into each other or fall off ledges.”

The name change and program merger were finalized at the June 21 meeting of the Ohio University Board of Trustees. The school’s current bachelor’s and master’s degree in ITS will continue to be offered; new academic programs are also being planned that will incorporate game design elements of an existing major in the School of Media Arts and Studies. As part of the new structure, three faculty members joined the McClure School from other units in the college.

At the reception, Bowditch outlined the 15-year history of the GRID Lab, from its beginnings as an arcade on Court Street to a high-profile AR/VR lab with more than $4 million in research grants and 40 student employees.

“I think the most important word in the new school is ‘emerging,’” Bowditch said. “It’s going to keep us honest; it’s going to force us to continually reevaluate what we’re doing; it’s kind of a promise we’re making to the students to constantly assess things.”

When it was time to remove the banner, Kruse asked everyone to use their party favors “in lieu of a drum roll.” To a chorus of enthusiastically squeaking rubber ducks, Titsworth and Kruse pulled ropes attached to the banner, revealing the new name and officially beginning a new era for the McClure School.