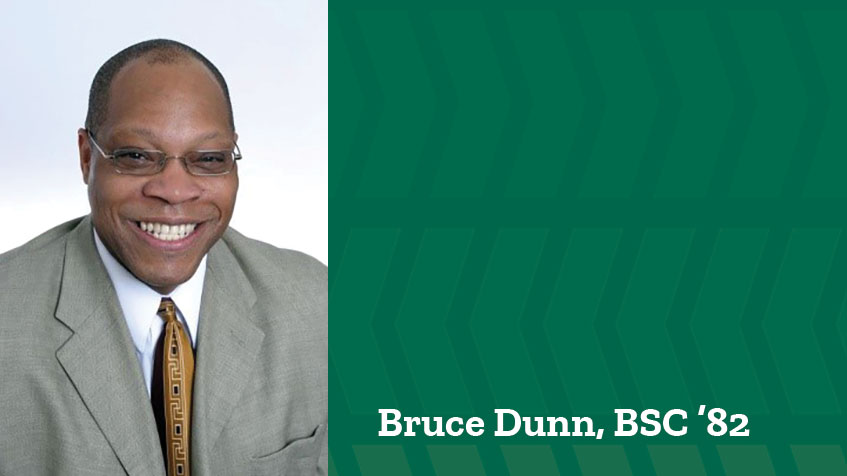 What do you do? For ESPN, I am responsible for sponsors/advertiser’s commercials, graphic billboards and voiceover reads to air during a broadcast in the allotted time slots as sold within a specific sporting event.

For Seabreeze High School, I develop curriculum and project assignments as a part of teaching hands-on techniques with broadcast equipment in the classroom. Classroom instruction also includes copyright law, scripting and writing proposals from conception to completion and teaching students how to develop content using specific rubrics. The digital video technology curriculum is taught over six class periods, five days a week to freshman, sophomores, juniors and seniors. Over the past three years, my total headcount per year has been an average of 140 students enrolled in my elective course through Career Technical Education.

What made you come to Ohio University? Were there other places you considered? I was born and raised in Brooklyn, N.Y., where many of my friends were planning to attend Syracuse University. I knew at that time if I did not get a fresh start in college away from my childhood friends, I probably would have never graduated. Other places I visited and considered attending, because I was playing football in high school, were Seton Hall, Hofstra, Wake Forest and Tennessee. All those institutions offered me scholarships, unlike Ohio University. I had to earn my way into the University and onto the football team as a walk-on. My primary reason for selecting OHIO over the other colleges was that, at the time in 1977, OHIO was ranked number #3 in the country in communications among undergraduate programs.

How did the Scripps College of Communication equip you with the skills you needed to succeed? I was equipped with hands-on experience in the classroom curriculum and early technology thanks to the partnership with WOUB Radio and Television. The station provided me with the real-world experiences to perfect my skills as a technical person and develop the knowledge and confidence to become a content producer at an early age.

What about your experiences here was so memorable? The memories are still vivid to this day: the 10 p.m. live “Newswatch” program, the studio music productions that were nationally distributed to PBS (Ramblin’ series,) and Communication Weeks that allowed me to meet Ted Turner, Daniel Schoor and several big-name journalists.

Tell us about your career path. During my junior year, I began working for ABC Sports as a production runner working the pro bowlers tour on weekends. I would adjust my schedule so that I did not have classes on Fridays. I would leave Athens after school, usually on Thursday evening, to drive to tournament locations. I would travel as far north as Wisconsin, east to Connecticut, south to Texas and west to Kansas in a weekend. Because of that experience, I was hired immediately after graduation by an OHIO alumnus to work as a producer/director for WKID-TV51 in Hollywood, Fla.

While in Hollywood for seven years, I was promoted to a management position and then worked freelance for BET Sports and as a second-unit cameraman for the television series “Miami Vice” in the early 80s. After a corporate media buyout, I became the production/operations manager for WSCV-TV51, which became Telemundo, the Spanish news operation in Florida.

Afterward, I went to ABC Sports in New York City as a full-time production assistant in 1987 to work the 1988 Olympics. Once the Olympic games were over, I returned to Telemundo until 1989 when I got married and moved to State College, Pa., to work for Penn State Public Broadcasting (WPSX TV/WPSU Radio) as the head of program production and executive producer. That position also came through an OHIO alumni contact. I continued my weekend freelance work with BET Sports. During my next seven years employed in Pennsylvania, I became an adjunct professor and took two sabbaticals to work the 1992 Olympics in Barcelona, Spain, and 1996 Olympics in Atlanta, Ga., as the graphics manager. I won two Emmy Awards for the graphic look of those two Olympics.

In 1996, I was offered an opportunity to return to Florida to build a new PBS high-definition station as the director of production operations in central Florida at WCEU-TV, which station call letters changed to WDSC-TV to represent the name of the college, Daytona State College. I began as the director of production in 1996 and was promoted in 2005 to associate vice president and general manager. I also became a DSC faculty member. I created my own production company in 2002 called DUNN Enterprises of Central Florida Inc. to keep my freelance business active.

After a 15-year career teaching, managing, developing, building and learning about the analog to digital to high-definition transitions that were FCC-mandated, I accepted yet another challenge to work for ESPN full-time in Bristol, Conn., in 2012 to build two 4K/8K SportsCenter studios, an NFL studio and a upgraded college football studio. I commuted from Florida to Connecticut monthly until 2016 when I returned to central Florida to resume my freelance work with various broadcast networks.

I then received a call from a friend about a high school that purchased new technology and didn’t have anyone on staff that could teach the students how to operate it. In 2017, I was officially hired to teach high school students on the use of the new digital video technology and how to produce video and audio content.

How has your work life and or focus changed due to the spread of COVID-19 in the U.S. and resulting precautionary measures? The biggest change for me is that I am adjusting for the loss of my consultant income because of the economy shutting down. Working from home is not a challenge for me because, as an independent contractor, freelancer and consultant, you work a lot from home. I also use to travel every weekend covering sporting events, which came to a screeching halt in March 2020.

Another difference is that my wife, who is an administrator at the University of Central Florida, is also working from home. We have had to divide the house so that we have equal space to retreat when we need a break from our computers. I have an office space in my home and my retreat area is the backyard and garage and hers is the master bedroom where she has her office set up.

I had 148 students enrolled in my classroom studio, but now everything is being taught online and through distance learning. I am interacting not only with my students but their parents as well. I have had to learn several new software applications to teach and help students and parents understand how to use it. Everyone knows what the CDC guidelines are, but some people are not following them for whatever reasons.

What advice do you have for current students? My advice for students is to understand the importance of education. Learn how to learn and do not take the things in life that seem trivial for granted. Find your passion and make it your life’s work. If you love what you do for a living, then you will never work a day in your life.