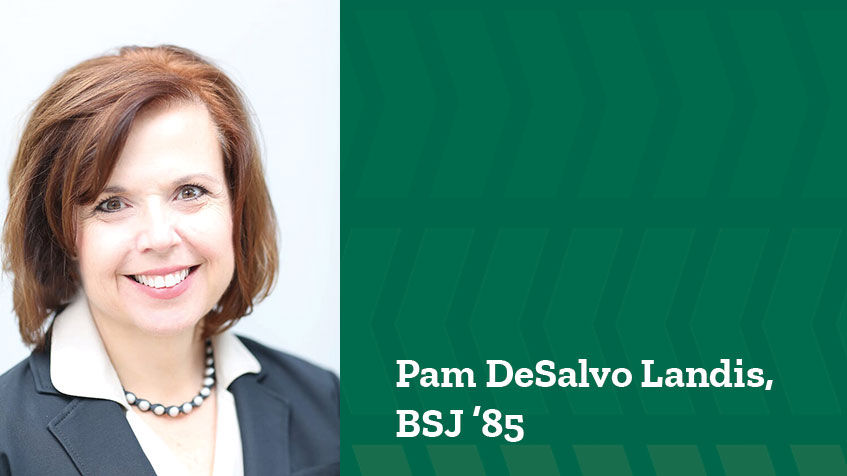 What do you do? I oversee the strategy, development and implementation of digital strategies that allow patients and clinicians to more effectively work together in healthcare. Essentially, my teams manage all web, mobile applications, contact centers and consumer analytics for New Jersey's largest health system. The team focuses on enabling technologies that are easy to use in ensuring people have access to care and can manage their care well.

What made you come to Ohio University? Were there other places you considered? My father said I could go anywhere I wanted for college, as long as it was a state school in Ohio within four hours of home. So I looked at Ohio University. I was interested in both law and journalism, and OHIO had a great reputation in preparing students for both disciplines.

How did the Scripps College of Communication equip you with the skills you needed to succeed? While I focused on being a news reporter in school and I was one for a while, I found that the skills and knowledge I acquired at Ohio University served me well during my whole career. The ability to synthesize vast amounts of information and communicate well to people who don't have the knowledge or background in the subject is ultimately a transferable skill. As a journalism major, most of our coursework was outside of the School of Journalism so I spent a lot of time in history and political science classes. That liberal arts background sharpened my knowledge of the world around us. I carry that interest to this day. Scripps helped me hone my skills in communication. The liberal arts classes gave me a foundation of which to understand the world.

What about your experiences here was so memorable? I worked at The Post and every day was a memorable one. I made lifelong friends at The Post, and, during this crisis, we do have Zoom parties. That bond of working late night preparing the paper for the next day can last a lifetime.

Tell us about your career path. Mine is so non-traditional and just a series of pivots. I started out as a cub reporter for Gannett in Pennsylvania right after college. Remember, that was smack dab in the middle of a recession, and I felt lucky to have a job in my chosen field. After a few years reporting though, I really wanted to move away from daily journalism and felt a need to get involved in politics and contribute more to making the world a better place, rather than reporting on the efforts of making the world better. I worked in politics on the state and national level in both campaigns and lobbying work. I loved the satisfaction of seeing things like the Family and Medical Leave Act get signed into law.

In 1994, I had an epiphany though. I was working in Washington on the first attempt at healthcare reform. When it failed, I was crushed and really thought Washington D.C. was dysfunctional. So I left my D.C. job but my interest was sparked in healthcare. I then went to Johns Hopkins Medical Institutions and worked in clinical public relations, publicizing the great research work that brilliant scientists and physicians were doing there. The server for the department was in my cubicle and when things went wrong, I was the person they called to fix it. I learned server technology from just being in the right place.

One day, my boss said, "We really need to figure out this World Wide Web thing." I volunteered since I was officially the department "computer expert." I taught myself HTML and other languages and helped with Hopkins' early web efforts. A few years later, I was at Henry Ford Health System in Detroit, again doing clinical PR, when they decided they needed to do something about the web. I volunteered and stayed with it for 15 years there, building an award-winning web team.

Then in 2011, I went to Atrium Health in Charlotte, N.C. to do the same, to build a digital team. Along the way, I learned about other healthcare technologies, including electronic medical record systems, enterprise resource planning systems and support systems. I also earned a master's in health informatics. Now I'm a Jersey girl and doing the same work, figuring out how technology can make healthcare easier to access and manage.

The through line here is that the skills I learned at OHIO have served me well. The ability to quickly understand the data and communicate to others were needed in every job I've had.

How has your work life and or focus changed due to the spread of COVID-19 in the U.S. and resulting precautionary measures? I work on COVID-19 all day, every day. We had our first confirmed patient on March 3. Since then, the team has worked on deployment of public and private COVID web sites for information sharing and deployment of video visit technology, virtualization of contact centers, social media campaigns and chatbots. I also support communication efforts for our Network Command Center where all operational management happens. Someday, the stories will emerge about what was happening here in New York and New Jersey and the moments of utter fear and despair coupled with breathtaking compassion, courage and commitment. What I have witnessed from caregivers and their support partners reaffirms your belief in the essential goodness of people. All the training and preparation in the world probably couldn't have prepared us for this onslaught, but we will be saved by the goodness in people.

What advice do you have for current students? You never stop learning. One thing I'm noticing these days are the leaders and team members who are able to adapt well to the changes. Some people are doing very well, but others are still hanging on to the old way. It's interesting to see how people face challenges. So, my advice is to watch and learn from others and be open to volunteering. I never thought I could code, but I raised my hand and here I am. Also, the job you have today will not be the job you have in 20 years. That job doesn't yet exist. My position or entire field didn't exist in 1985. Yet, I'm still served well by the education I received at Ohio University.