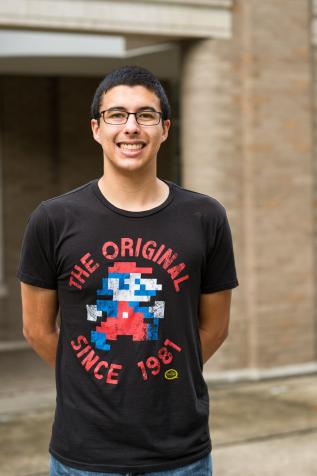 Plans after graduation: I just moved to New England to work as the social media coordinator for a pro esports team called the Boston Uprising, one of 20 teams in the Overwatch League. (Shameless plug: go follow us everywhere @BostonUprising)

What clubs and organizations were you involved in? I was a member of the Ukulele Club, PRSSA and the Overwatch Club for a year each. I was also part of Kendo Club and Reach Out on Campus for four years each. I captained a team that competed in the National Open Division Overwatch tournament when I was part of the Overwatch Club, and I was a starter for the squad that recently represented the university in the TESPA Collegiate Championship tournament. I earned my black belt in kendo and served as club president there, so I definitely had a blast in the clubs on campus.

Did you have any jobs on campus? Yes! I worked the front desk at University Communications and Marketing for a couple years, then I did the same at the OMSAR office for a semester my junior year. I had to quit that job to study abroad in Hong Kong my junior year, and when I came back, I was a Lyft driver in my spare time during senior year. I 100% recommend studying abroad, and I think everyone should take an international trip during college, whether it’s for a semester or just a few weeks in the summer.

Did you complete any internships? What were they? Where? After my freshman year, I interned as the Event Communications Assistant at University Communications and Marketing, helping manage and promote the official calendar. After my sophomore year, I interned as a door to door salesman with IGS Energy, which is essentially a third-party utility provider. I learned a lot of valuable skills there, but I also learned that the sales side of marketing (my minor) is not for me!

Briefly describe the aspects of your Scripps experience that you think most helped you land your job: The most relevant, useful experiences when it came to landing my job came outside the classroom, but they were influenced a lot by things I learned or refined through Scripps. For example, I spent a lot of time outside the classroom working on social media projects with my friends, and I wrote hundreds of articles about the gaming industry for various publications, most of which were off-campus. But Scripps laid the groundwork: the AP style skills, the knack for knowing where to find and how to tell a good story, the communication theories and social media best practices. It’s hard to pin down what the most helpful aspect(s) were, because I think my current job is a big mix of a lot of different skills that I learned over the years from Scripps and had the opportunity to put into action as a college student. With that mix of experiences, I think I was able to land my job. So, to me, the most useful aspect was probably the fact that Scripps was such a holistic experience.

How do you feel about graduating? I’ll be honest, at first I was a little worried. Most of my friends had such cool jobs lined up by graduation, but I didn’t. Halfway through May, all I had were a couple “no” responses after initial interviews and a whole lot of silence from the other places I submitted applications. I started to get antsy, wondering if I’d be able to get the niche sort of job I wanted (social media in esports) after all.

But then the Uprising reached out, and after a couple strenuous weeks of interviews, I got the job! That was on a Thursday night. In less than a week, I moved out of my Athens apartment, went home, repacked all my things, found a new place to live and drove to New England to move in so that I could start work the next Monday. Right now, I’m in LA on a work trip to meet the other half of our staff and develop content; I’ve only been with Boston for two weeks, and I’m already diving in headfirst.

That’s a really longwinded way of saying that in just a matter of three weeks, my feelings toward graduation went from nervousness to a crazy flurry of emotions ranging from “oh my gosh, I’m actually working my dream job” to “Wow, I miss my friends and family.” Because when I sit down to think and take a deep breath, it’s insane to compare where I was less than three weeks ago to what I’m doing right now, working with the greatest Overwatch players in the world. It’s an incredible, surreal feeling.

In June, a whole new class of Ohio University students came to campus for Bobcat Student Orientation. If you could tell them one thing, what would it be? Since I already mentioned that everyone should study abroad, I will say that you should figure out what you want to do – I mean, what you really really love to do – and become the best at it that you can, no matter how crazy it is. Pinning down your life goals can be tough, but once you do, I’m a firm believer that you truly can do anything you set your mind to if you’re determined to work harder and perform better than everyone else. I mean, until college, I lived in a town of 250 people where the internet connection was so bad that I couldn’t play a video game without debilitating lag (gamers know how it is). But I knew exactly what I wanted and set out to accomplish it, despite people telling me that pursuing gaming as a career was ludicrous, senseless and financially irresponsible, to put it lightly.

If you know that what you want to do is niche, then the downside is that you’ve got an uphill battle ahead of you to snag one of those few spots. But the upside is that you can spend your time in college practicing skills and preparing a resume that’s precisely designed to get you exactly where you want to go. Don’t generalize. Specialize. The good news is that the crew at Scripps is phenomenal. They’ll hook you up with amazing opportunities, connect you with some of the best industry pros, and help you reach your goals. Let your professors know what those goals are, and if they see you’re serious, I know they’ll do whatever they can to help. But you have to be willing to put in more than 100% to make it happen. If you do, I’m confident you’ll go far.