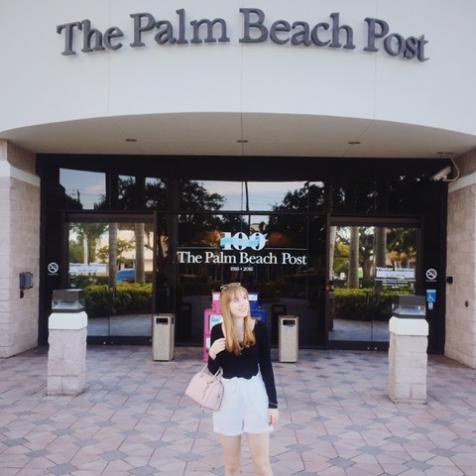 Plans after graduation: Interning at The Palm Beach Post at the breaking news desk!

What clubs and organizations were you involved in? I was very involved with The Post from the moment I stepped foot on campus. I started covering student government my freshman year, and then worked my way up to become editor-in-chief my senior year. It really was a once-in-a-lifetime experience! The Post is where I forged my closest friendships, honed my skills as a writer and learned to become a confident leader.

Did you have any jobs on campus? I did a brief stint with Boyd Market my freshman year before I realized I wanted to prioritize and devote more of my time to writing and reporting. Sophomore year, I rolled burritos at the uptown Chipotle, but by the time I became assistant news editor for The Post my junior year, I was spending more than 40 hours per week in the newsroom. Basically, I decided to bite the bullet and make The Post my only job. It was a scary decision at the time because I knew my financial freedom would be a little more limited, but ultimately, it helped me focus on doing what I loved.

Did you complete any internships? What were they? Where? I interned with a different publication every summer. During my freshman year, I worked for my hometown paper in Clermont County, OH, The Clermont Sun. It was a four-person newsroom. I was covering things like county fairs, and hitching rides on old-time fire engines to go to brush fires. Truthfully, it was so much fun and it’s what really sparked my interest in community news.
My sophomore year, I switched gears a little bit and went to Cincinnati Magazine, which was a lot heavier on the arts and culture than I was used to. I was an editorial intern, so I spent most of my time behind the scenes, editing copy and writing blurbs for the online and print editions of the magazine.
Junior year I worked with The Ohio Center for Investigative Journalism, a non-profit news site that’s part of the Institute for Nonprofit News. That summer, I put my time and energy into one project that looked at preschool affordability. It combined two of my favorite things — data and education!

Briefly describe the aspects of your Scripps experience that you think most helped you land your job: If Scripps taught me one thing (and trust me, they taught me a lot), it’s that relationships mean everything. I’ve always been shy when it comes to networking, but the more involved I became within The Post and Scripps, the more I was able to build those relationships with professors, alumni and professionals in the field. Of course, you’re going to learn practical skills in the classroom. If it wasn’t for the classes I took at Scripps, I wouldn’t know the first thing about using a database to dig for stories, how to fight for public information, or how to make sound ethical decisions in the newsroom. I can’t even count how many times I've called professors for advice just hours before sending the paper to press.
I’ve always appreciated the balance Scripps has created with independent student media. Publications like The Post and The New Political aren’t just lab papers where students are going to receive class credits — they’re vibrant organizations where students are free to forge their own paths and hone the skills they learned in the classroom. Couple that real-world experience with the unbelievable support from professors and challenging coursework, and you’ve got yourself a recipe for great student journalists.

How do you feel about graduating? I have such mixed feelings about graduation. On one hand, I feel extremely ready to be out testing my skills in the “real world.” I’ve been at The Palm Beach Post for just a few weeks now, and I’m loving every minute of it. I can’t help but get that unmistakable feeling that something new and exciting is happening.
On the other hand, however, I constantly find myself scrolling through my phone looking through photos of my time in Athens. It’s a huge transition to go from working in a newsroom with your best friends 50+ hours per week to having to remember to text them every once and awhile. Our five outgoing executive editors at The Post actually all ended up in different corners of the country after graduation, and we miss each other dearly. At the end of the day, though, I’m going to look back on my time at OU with the best memories. I’m not the sort of person who’s stuck on the belief that your college years are the best years of your life — but I’m certainly starting to miss them.

In June, a whole new class of Ohio University students came to campus for Bobcat Student Orientation. If you could tell them one thing, what would it be? If I could tell the incoming class one thing, it would be to get involved. Visualize where you want to be when you start your senior year, and even if that goal seems unattainable, go for it anyway. When I attended Bobcat Student Orientation, I got it in my head that I wanted to be the editor-in-chief of The Post someday. I knew it would take three years of nose-to-the-grindstone work and sacrifice to make that happen. For the next three years, I put everything I had toward reaching that goal. And somehow, I made it a reality. You’re going to run into challenges along the way. You’re going to fail a few times — I know I did. But at the end of the day, if you give these next four years all that you have (and do so with a halfway-decent attitude), you’re going to make lasting friendships, create work that matters, and ultimately, find your calling.