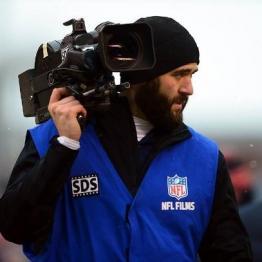 Evan Shaw has worked in the television/film industry for more than 12 years, covering everything from Lollapalooza to Super Bowl Sunday. His work has been recognized through 13 Emmy Awards in categories such as cinematography, editing, producing, writing, and musical arrangement; including a National Sports Emmy in 2019 for Outstanding Cinematography for:  Hard Knocks: Training Camp with the Cleveland Browns.

Shaw is currently a documentary producer with WOUB Public Media, a PBS affiliate in Athens, Ohio. My projects have covered a wide range of topics from historical documentaries to films about mental-illness inside Ohio's prison system.

He has also been a freelance cinematographer with NFL Films since 2006. During that time I've shot more that 200 NFL games, worked on special projects like NFL Films Presents, and Hard Knocks, and covered multiple SuperBowls.

Shaw thrives on covering stories through vérité camerawork and editing: “Nothing makes me more excited than an unscripted shoot, with only one chance to capture the perfect moment.”