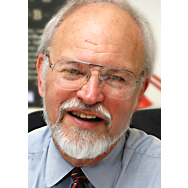 My interest in media and culture began while I was a librarian (New York Public Library and Wagner College), developed further as I taught American literature (Long Island University, New York University, and the University of Helsinki), and matured when I founded the Department of Media Arts (radio, television, photography, computer graphics) at Long Island University. I devoted a year in an NEH think tank at the University of Chicago to study of information theory and of the reciprocal relationship between culture and technology. At Ohio University, my teaching and research has revolved around the ways in which messages move through (primarily) American culture, with particular emphasis on how that culture refreshes itself by mining its margins for new ideas. I am especially interested in outlaw discourses (such as pornography), and how those discourses both destabilize and restabilize social structures and practices. More recently, I have focused on organic metaphors of culture, which challenge older thermodynamic models of information and media with concepts of self-organization and the generation of meaning out of noise.