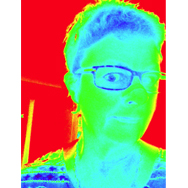 Dr. Nelson is an Associate Professor in the School of Media Arts and Studies, with teaching interests in Media Criticism (including TV, comics & blogs), Critical Cultural Media Theory, Qualitative Research, and Media in the Middle East and North Africa. She received an 1804 Grant in 2012 to fund The PD/MS Narrative Project, a collective repository of stories and videos by people living with Parkinson's Disease and Multiple Sclerosis.

She was named Outstanding Graduate Faculty at OU in 1993, was awarded a Fulbright Scholarship to Morocco in 1996, was elected to the Board of Scholars by the International Communicology Institute in 2007, and taught for two years in the United Arab Emirates (2009, 2010).

Dr. Nelson has authored several refereed journal articles, book chapters, and conference papers. She has directed over 40 doctoral dissertations, the last 3 of which were awarded first prizes by the International Communication Association’s Cross-Cultural Division.

When she’s not watching The Amazing Race and Gypsy Sisters for their endless capacity for exploiting everything known to be good and human, she’s practicing her Buckeye art and polishing her Arabic, occasionally casting sidelong glances at her teenaged children and sighing.

"Whole Lotta Shakin' Goin' On: A Rhizomatic Approach to Media Representations of Parkinson's Disease:  Books, TV, Blogs, and Beyond"

Click to read my work on The PD/MS Narrative Project

Funded by an OU 1804 grant--this presentation looks at stories about, and by, people with Parkinson's Disease and Multiple Sclerosis from the patient's perspective:  from the brain scan image at the moment of diagnosis to the scramble for information in books, websites, and blogs, to the unbidden images in film and TV.  The presentation ends with two 5-minute web videos produced by The PD/MS Narrative Project, an award-winning collective of Ohio University students, faculty, and people with PD.  Using the theoretical approaches of Michel Foucault, Gilles Deleuze & Felix Guattari, and Michael Polanyi, Nelson maps out the overlapping areas of MEdical Discourse, MEdia Discourse, and what she calls MExperience (the intersection of all 3).  The presentation is interactive and entertaining:  a group of 80 Physical Therapy students at Ohio University called it, "the best (or worst) thing to happen to PD since Michael J. Fox!"  Another student wrote:  "This is a message I'll take with me after graduation: you can do anything.  It's so honest and inspiring!"  From a media professional:  "I don't know what I was expecting, but it wasn't that.  It blew me away."

Here are a few videos associated with the Project:

Dr. Karin Sandell is a co-founder of the project, and our excellent team of student-producers/researchers include: Yan Zheng and Camilo Perez (MA students in COMDEV), Nolan Alexander, Babe Finley, and Neal Mohr (MDIA undergrads) and Stephen Toropov (HTC-English).