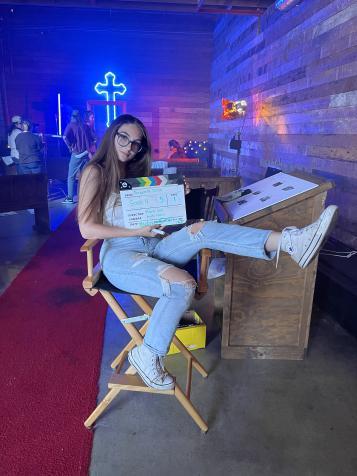 From hot Los Angeles evenings to rainy Athens days, senior Natalie Artz has had an eventful four years at OHIO. Artz is majoring in media arts production in the School of Media Arts and Studies and has minors in advertising and public relations and fashion development. She is also completing the social media certificate.

“I chose to study media arts production because it is a career path that is self-expressive, creative, and full of passionate people,” she said. “I also wanted to go into an industry that was enjoyable for me and impactful.”

Artz said her favorite social media course has been the capstone, MDIA 4120: Advanced social media. She enjoyed the insights the class gave on the long-term effects of social media use and the discussion-based format of the class.

Artz is also involved with student organizations at OHIO. She is the events coordinator for the Ohio University Multimedia Society (OUMS) and a member of Rough Cut/AVW Studios.

“OUMS is a personal branding club that allows me to network and strategically market myself as a media professional,” she said. “Rough Cut/AVW is a film club that creates student films each semester and allows me to get production experience!”

Aside from her classes and club involvement, Natalie also had the opportunity to spend the summer of 2021 in Los Angeles with the OHIO-in-LA program.

“The best experience I had at OU was hands-down the OHIO-in-LA program,” said Artz. “There are so many more Bobcats in L.A. than I expected. I was able to experience life in LA, create a film, take classes, and have an internship.

“Another great experience I’ve had was going to New York City with OUMS for their annual networking trip. I was able to meet so many multimedia creators and OU alumni who live in NYC.”

Artz said that if she could tell her freshman self one thing, it would be to get involved with Scripps student organizations sooner rather than later because these are important learning opportunities for students at all stages.

After graduation, Natalie hopes to move to Los Angeles and pursue a career in media or film. Her ideal job would allow her to work regularly on film sets.