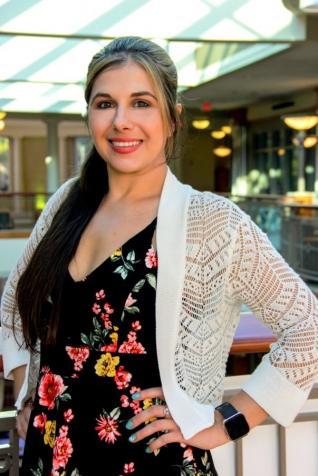 Viktoria Marinova, who has been an Ohio University student since 2016, works towards completing her PhD focusing upon social enterprises, nonprofits, and needs identification with various organizations in regard to social media.
Alex Fredecker

Viktoria Marinova, a PhD student and graduate instructor in the School of Media Arts & Studies, recently created a study examining people’s motivations to donate to charities through social media platforms such as Facebook. The results demonstrate that online giving is often inspired by external motivators mimicking giving trends offline.

“This indicates that individuals are not intrinsically motivated to donate, but rather do so in between their regular social media use and often by chance,” the scholar concluded. This study is part of Marinova’s overarching focus on nonprofits and how a good social media strategy is pivotal to fundraising and volunteer recruitment success in a rapidly expanding digital landscape.

While conducting her research, Marinova examined several studies regarding social media use. She compared the uses and gratifications that people receive from using social media platforms with those they receive from fundraising or online donating. Some of the resulting gratifications include personal status growth, relationship maintenance, and virtual giving community. She hopes to transform the data from this study into specific recommendations for nonprofits to assist them in developing content for social media platforms.

Beginning in her early childhood, which was spent in Bulgaria, Marinova developed a keen passion for reading and writing. This talent was recognized through Bulgarian tradition, as she took her first steps and repeatedly chose a pen and paper from a set of laid-out objects, signifying her future career. It continued as Marinova immigrated to South Africa at eight years old and found solace from the unknown through what she knew most: reading and writing.

Marinova attended Rhodes University in South Africa, a school renowned for its journalism program. Upon entering college, she planned on pursuing print media, but found a passion for television and photography instead. After a successful college career, Marinova managed her own Facebook photography business for three years before deciding to pursue a job at one of South Africa’s major media conglomerates, Primedia. Starting as an assistant to the channel project manager, she went on to become the channel project manager herself. During these roles, Marinova specialized in the Theatres of Learning program, creating educational programs for high school students.

Following her rewarding experience with Primedia, Marinova felt drawn to revisit her academic career. In 2016, she joined Ohio University’s Communication and Development master’s degree program after hearing glowing reviews from a friend in the program. Marinova was specifically intrigued by this program as it was one of the few master’s programs she found that combined both communication and developmental studies. After a successful first year in the program, she pursued a Master of Public Administration (MPA) with The Voinovich School of Leadership & Public Affairs, as well.

Since her time in the MPA program, Marinova has worked with Social Enterprise Ecosystem (SEE Appalachia) during the summers. Through this work, she has transformed into a social media strategist with a focus on social enterprises, nonprofits, and needs identification with various organizations.

“I realized that there was a deep need to figure out a way that social enterprises and nonprofits could implement an easy-to-use social media strategy that looks legitimate and promotes engagement and fundraising. That is where my research journey began,” Marinova stated.

In the next year and a half, Marinova hopes to establish her dissertation topic and complete her doctorate. She then intends to pursue Occupational Practical Training (OPT), or temporary employment relevant to her area of study, before eventually returning to her home country of South Africa.