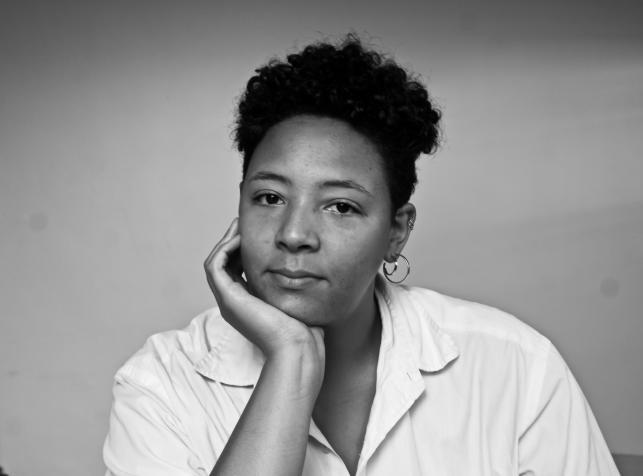 Kim M Reynolds (she/they), Media and Social Change alum '17, spent her time at Ohio University in student politics and the arts. While in student government, they led and participated in multiple Black Lives Matter demonstrations, and programmed events like “My Masculinity Helps,” a screening and panel event about Black masculinity and its relation to sexual assault, and "Athens Access," a panel event focused on reproductive healthcare access in Southeast Ohio. Near the end of her time at OU in February 2017, she helped organize and was a part of a sit-in that challenged the university to become a sanctuary campus. The mission was to have immigration status qualified as a protected class under the university’s discrimination policy, which led to 70 students being arrested by the university police, and in the months following charges were dropped.

Later that year, Reynolds graduated with a BSC in Media and Social Change and a certificate in Diversity Studies. Her passion for education took her across the globe, graduating from the London School of Economics and Political Science with an MSc and M.A. in Global Media and Communications and later the University of Cape Town in South Africa. Reynolds’ move to South Africa “changed her race, but not the realities of racism.” In her story published on The Black Youth Project, Reynolds recounts the distinction between “coloured” and “Black”' in South Africa, and how these terms were no longer synonymous as she was used to in America. Within the formal South African racial hierarchy implemented by the apartheid government, “coloured” (historically and on paper) ranks socially higher than “Black,” due to both specific and arbitrary markers of look, hair, language, and location. Reynolds, who is read as “coloured” in South Africa, saw discrimination firsthand from people who considered themselves to be “above” the Black population, while understanding the complexity and ramifications of how history plays out today. Through her experiences, she found relatability between Black American and coloured racial and historical positioning given each cultures’ entanglement with slavery, language, and place within the national imagination.

Reynolds’ passion and drive for the realities of Black queer identity has led to an outpour of culturally moving pieces. One such project was her thesis at the University of Cape Town titled Becoming, a photo series about Black queer imagination and why it’s important to “be who you are.” Her other master’s thesis analyzed how mainstream media covered the Colin Kaepernick and Take a Knee movement, and argued that mainstream American news discourse protects white supremacy through racialized discourse across left, right, and center publications. “I was getting to the bottom of things and it was just a lot to analyze a lot of different power structures in one place,” she says about the piece.

Currently, she works with Our Data Bodies, a research collaborative that focuses on how big data and tech companies reproduce racism. The collaborative was featured in the New York Times’ 2020 Good Tech Awards. It’s an important study for the realities of a world where technology is inescapable. “They produce violence in a myriad of ways,” says Reynolds. She also is working on a multi-episode podcast called, “Blackness & Dance,” with Dani Kyengo and Vusi KaNkomo that explores the history and ties between Black culture and dance. Aside from these two projects, Reynolds continues to pursue her own cultural authorship. She has taught and guest lectured on critical media for the past two years, giving a lecture at the University of Cape Town last year. She tutors small groups about the cultural work she does and writes poetry, which she considers important to her imaginative work.

All of her cultural work comes back to her time at OHIO. She notes that she wouldn’t be where she is today without the Office of Multicultural Success and Retention (OMSAR) and her mentor Dr. Jacob Okumu. It was only after her OMSAR mentor, Jordyn Tramble, took her to see Fruitvale Station by Ryan Coogler that she decided to leave the College of Business and begin her Media Arts & Studies journey in an effort to dive deeper into issues addressed by that film. Reynolds says Professor Josh Antonuccio’s South By Southwest (SXSW) course gave her immense experience and helped her land her first internship. Dr. Karen Riggs’ work with critical social media furthered her scholarly inspiration. She was introduced to London through Professor Andre Gribou’s (School of Music) semester abroad program, and was shaped deeply by her time in the multicultural center, the African-American Studies Department, and the Women, Gender, and Sexuality Studies department.