TechNuggets: The videos that keep Doug Bowie from losing his voice and mind 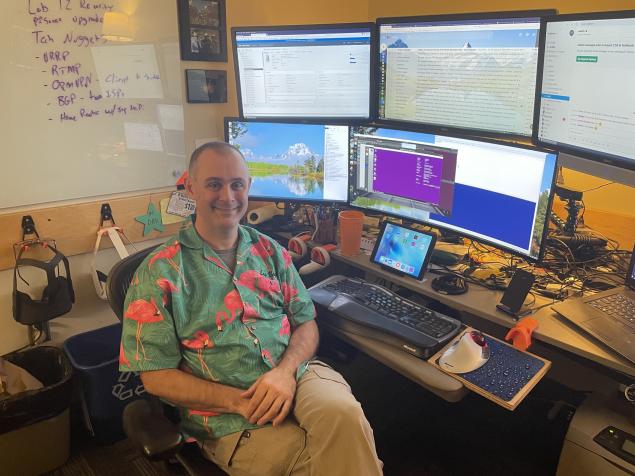 When the McClure school had classes in the Radio Television Center, or RTC, there was only one lab station for student groups to use. The professors had to constantly repeat what they told the last group regarding the software, problems, and tasks that they would encounter. Doug Bowie, who assisted and taught the students at this time, realized that he was tired of sounding like a broken record, and wished there was a way for him to inform the class without lecturing repeatedly. Enter Tech Nuggets, a video series that Doug Bowie posts on YouTube to inform students on a wide array of networking and technical components. All his video tutorials on lots of information networking topics can be found here.

To make Tech Nuggets, Bowie uses Camtasia, a screen recording software that also records your voice. Bowie prepares a PowerPoint presentation showcasing a certain technical concept, such as NAT, or Network Area Translation. He records his presentation, occasionally switching to the hands-on portion of the video, which shows what the students will encounter in the class. It’s an easy way to bring students up to speed on a concept, as well as show what the lab/exercise will look like when they try it out themselves.

There are currently 42 videos on the ECT Tech Nuggets channel. Each of these videos attempt to be “nugget-sized” in order to not overwhelm or bore the viewer, with videos shooting to be less than 30 minutes. Examples of the technical concepts that are presented are Nmap, iPerf, GNS3, DHCP, OneDrive, VyOS, VPN, IPv4 subnetting, Routing, Ping, and Dig, just to name a few.

Due to COVID, faculty use Microsoft Teams a lot more, so Doug crafted a tech nugget talking about the various features of the software. He is planning on talking about more conceptual and theoretical topics regarding the technology realm, such as what is a routing protocol and what are the uses of it.

The Tech Nugget series was extremely helpful for me when I was taking his class, and with a lecture only once a week through a webcam or “a room with no faces”, they are essential for helping students grasp what they are suppose to do in their class.

“It’s constantly evolving and there is a need for them. There will always be more coming up and it is certainly needed for a younger audience.” Said Bowie.

The McClure School of Emerging Communication Technologies strives to offer the best academic programs in the IT (Information Technology)(opens in a new window), the game development and the Virtual Reality/Augmented Reality(opens in a new window) (VR/AR) industries. Our programs and certificates cover numerous aspects of the rapidly changing industries of information networking, information security, data privacy, game development, digital animation and the academic side of esports.