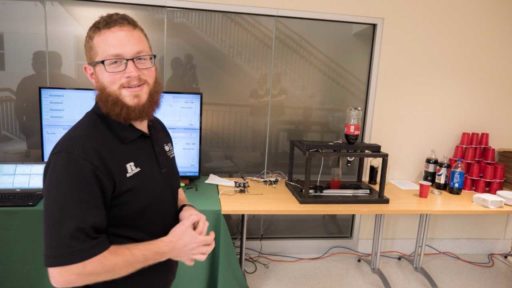 Through the ITS program at the McClure School, students and alumni are finding more and more ways to blend distinct interests together. For John Dolovacky, that process came from combining live event production and information systems.

Dolovacky originally came to Ohio University as an audio music production major. After taking a break from school, he came back to the university to obtain an ITS degree. He had known about the program since his freshman orientation, but it took some time for him to make the switch.

“I’ve always been interested in computers and technology and music. I really enjoy the AV (audio-visual) industry and ITS seemed like a really good tie-in with that,” said Dolovacky.

While still a student finishing his degree, he began working as the full-time Assistant Technical Director at Baker University Center. Still in this position, he works with AV installation, maintenance, and programming for all of the event spaces that Event Services oversees. He works to configure and set up networks so that access points can communicate with each other.

Another key thing Dolovacky works with is security. “Security is a very hard area but it’s growing really fast,” he said. He emphasized that many audio consoles for live events have iPad apps but there are rarely passwords. This lack of security means that hackers could break into the network. He plans to continue looking into security issues as a student in the Master of Information and Telecommunication Systems (MITS) program.

Dolovacky began learning about security through a class with Professor Philip Campbell, saying that he learned what to look for and what he needed to do when configuring a network. He believes the classes offered through the program have been incredibly beneficial in real life application.

He believes that his ITS background has given him the opportunity to really excel in his field. “A lot of people think that the ITS program is strictly computer stuff. In reality, the program is the study of how devices talk and communicate between each other and more along the lines of what’s really going on in the wire or in the air and how the data is transmitted through that.”