Spotlight on ITS Student Ike Riesbeck 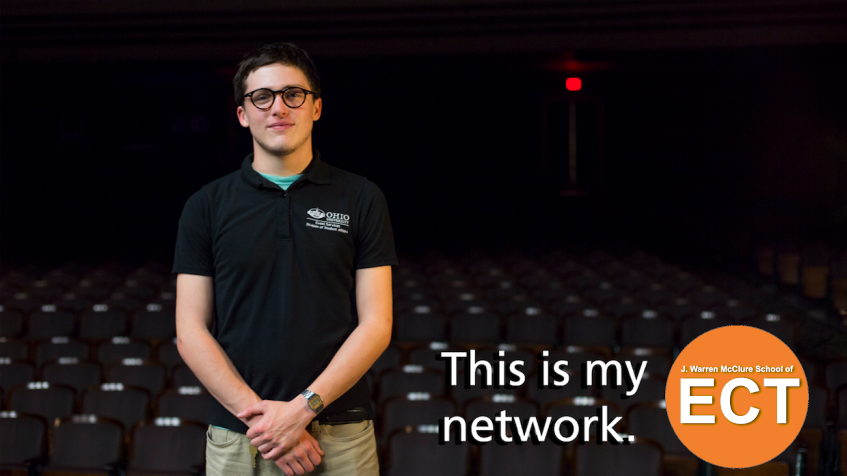 Ike Riesbeck came to Ohio University believing his calling was on the stage of a theater. Today, he works behind the scenes, working with information systems to make live productions happen.

During his first year of college in the BFA Theater program, Riesbeck began hearing more about the School of Emerging Communication Technologies. He talked to Doug Bowie, the McClure Network Admin.

“He told me about ITS and I was kind of entranced by it. The idea of these highly efficient systems for transmitting information and the fact that it relates to all the things I love doing in my free time,” said Riesbeck. He found that the ties to the internet, social media, and file transferring made him want to give the program a shot.

He finished out his first year as a theater student and then transferred to the McClure School's ITS program. Over the summer he began working in Memorial Auditorium where he has found the connection between the ITS field and live event production. Riesbeck compared the way that microphones project a signal into an auditorium to the way you might think about telephone signals. Being in a theater setting while working with the systems that allow productions to succeed, he has found the best of both worlds.

Ike remembers speaking with a graduate of the ITS progam during one of his first shifts who is now one of the Event Services administrators at Ohio University . “I asked him, ‘When do you use ITS in Event Services?’ and he looked at me and said, ‘Every single day.”

While Ike is new to the program, he is seeing similarities in the way information flows through auditorium systems every time he works. To him, one of the best things about the program is that it teaches critical thinking and problem solving, skills that can be utilized in any problem or situation.

Riesbeck appreciates the field of ITS and its complete permeability into any type of environment, “You’re using the things that the computer science and the electrical engineers build and you’re advising people how to use those things in the everyday world.” He highlights the network and business components of the field as something that many overlook.