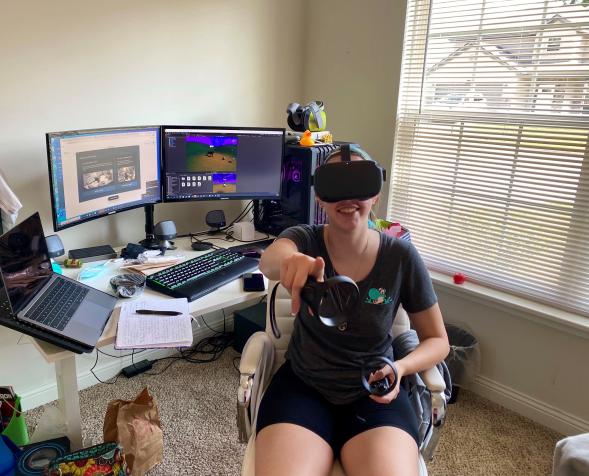 Alyssa Stahl is one of the newest XR Designer and Developers for Healium, a VR company in Missouri.

Healium is an app that uses Virtual Reality and Augmented Reality to help users focus, as well as manage mental health, stress, and anxiety. Depending on the equipment you have, the app captures heart and brain waves to power the experience you see. From fractals, butterflies, scenic landscapes, and flowers, Healium is on the forefront of creating these visuals. For example, one of these is called Awake The Light, where you follow circles and bubbles as you traverse caves, and mountains. Alumnus Alyssa Stahl is now part of their team, spearheading additional experiences.

She is creating "The Jaguar Experience", which will be featured in AR and on the Oculus Quest. The experience is you are going to play fetch with the majestic and colorful animal, tossing a ball for them to retrieve it. The jaguar will approach the ball based on your brain waves; if you are having heightened waves, the jaguar will chase the ball with ferosity. As you calm down, the animal will become calmer, eventually resting tranquilly at your feet.

Stahl was an HTC Media Arts and Studies Major with a minor in Psychology. She appreciates the resources that the ECT program had for VR, AR, and XR technology.
"The most valuable thing have been the exposure to such new technology and such new problems that no one have ever encountered; you cannot just Google the solution." stated Stahl.

"At the GRID lab you're trying to create or see if whatever works and sometimes it works, and a lot of the times it doesn't. I truly think that is one of the most valuable things I learned and honestly one of the biggest reasons on why I was hired." Stahl said.

"Most companies in tech like and value people who want to learn and problem solve because they are always problems in the industry, as well as new forms of technology... OU is great, I loved it there, and I miss it." said Stahl.

You can check out Healium's displays, projects, and products here!

The McClure School of Emerging Communication Technologies strives to offer the best academic programs in the IT (Information Technology), the game development and the Virtual Reality/Augmented Reality (VR/AR) industries. Our programs and certificates cover numerous aspects of the rapidly changing industries of information networking, information security, data privacy, game development, digital animation, and the academic side of esports.