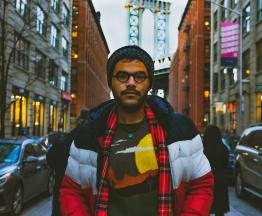 Satrajit “Jit” Ghosh Chowdhury started his doctoral program at the E.W. Scripps School of Journalism in the Fall 2018.

Jit’s current research focuses on media bias, media representation, fake news and misinformation, and audience cognition. He likes to study the receiving side of the communication spectrum and how the information is processed. He has presented four papers at different conferences and has published one paper and is in the process of publishing a book chapter.

Jit completed his Bachelor of Arts Degree from Gurudas College, University of Calcutta, in Journalism and Mass Communication. As a journalism student he went on to graduate with the highest distinction. While doing his Master’s in Journalism and Mass Communication at the University of Calcutta, Jit took part in a university-wide protest against the unfair treatments of students by the university administration. This incident delayed his graduation by months. He does not regret the decision of taking part in the protests, but he does regret the decision of sitting under the sun for hours in protest, as he would say, “’Twas not good for my skin.”

As a master's student, Jit gained interest in critical studies and global media imbalances. When defending his master's thesis, Media Subdues Public Opinion: Religious Profiling and American Media, one of his professors asked why he had chosen to write about America and not India. And that cemented his intentions to read and study more about the imbalances in information flow and the disparity within the global information system because he knew that the West controls the global media channel. The macro- and the micro-level effects of this imbalance contribute toward misrepresentation, misinformation, and subsequent priming of audiences.

Jit worked as a sub-editor and a reporter for a local English daily, Morning India. Jit says that he “hated every bit of it” because the newspaper house was imbued with corruption, favoritism, nepotism, and was politically motivated. This led to Jit’s early resignation from his otherwise lucrative job.

One of the turning points for Jit that contributed towards his choice of study was the Oscar-winning film, Slumdog Millionaire and its gross misrepresentation of India and Indians. Speaking of films, Jit is a self-proclaimed cinephile. He geeks over Bollywood and Satyajit Ray (if you haven’t heard of Ray, grab some popcorn and visit Jit -- he’ll make sure that you get a crash course on him).

Jit tells people his philosophy is along the lines of a universalist, as inspired by one of his favorite authors, Rabindranath Tagore. Jit feels that we should work towards establishing a unified world, not separated by borders (“Vasudhaiva Kutumbakum” – The world is my family). However, when you talk to Jit, he will repeatedly assert, “Oh, I’m such a misanthrope!”