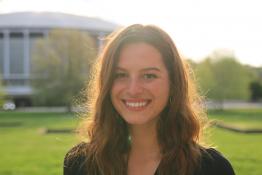 Natascha hails from Denmark in northern Europe. She received a bachelor's degree in International Communication and Multimedia at Aarhus University in Denmark and spent part of her undergraduate career studying at La Trobe University in Melbourne, Australia. In 2014 she enrolled in a master's degree program in American Studies at the University of Southern Denmark. Her studies eventually brought her to Ohio University, where she collected data for her thesis research on rural gentrification in Appalachia. Natascha immediately fell in love with Athens' small-town community and applied to continue her studies at Ohio. As she finished her master's degree remotely in the fall of 2016, she began classes for a master's degree in Journalism at the E.W. Scripps School of Journalism.

The overarching focus of Natascha’s research is documenting the work of uncelebrated minority journalists. She is interested in the U.S. criminal justice system and the advocacy work of minority reporters throughout history. Her master’s thesis centered on the journalistic work of progressive black editor and civil rights activist, Daisy Bates, who managed to occupy journalistic and rhetorical spaces normally occupied by white men in the mid-20th century. She has previously done research on the socioeconomic impact of rural gentrification in the Appalachia region and researched the coverage of immigrants’ lives in the New York tenements in the early 20th century.

Her dissertation examines the work of the black press in documenting the societal, economic and political impact of convict leasing in the late 19th  and early 20th century, and the connection between the racialized systems of convict labor and mass incarceration in the 21st century.

In 2018, Natascha received two awards from the American Journalism Historians Association, the Maurine Beasley Award for the Outstanding Paper on Women’s History, and the Robert Lance Memorial Award for Outstanding Student Paper. In 2019, she also received the Graduate Associate Outstanding Teaching Award from Ohio University.

She recently won an honorable mention for the American Journalism Historians Association 2020 Book of the Year Award alongside Ohio professor Michael S. Sweeney for their book Journalism and the Russo-Japanese War: The End of the Golden Age of Combat Correspondence.

She loves to travel more than anything else in the world and measures every potential expense in just how far it can get her on a Greyhound bus.