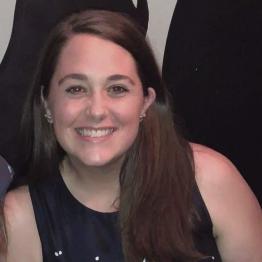 Bailey Dick received her masters from OU in 2018, along with graduate certificates in Women’s, Gender, and Sexuality Studies and Contemporary History. She is a graduate of Loyola University Chicago’s Interdisciplinary Honors Program and received bachelor’s degrees in English literature and Journalism. She spent time abroad during undergrad living and working in Dublin, Ireland, and doing field study in Belfast, Northern Ireland.

As a Scripps Howard Teaching Fellow at Ohio, Bailey has taught the History of American Journalism, Multiplatform Reporting and Writing, Advertising and Public Relations Writing, and The Future of Media, and has been a teaching assistant for the Media and the Civil Rights Movement class and trip and Ethics, Mass Media, and Society. She was the recipient of Ohio University’s 2018 Graduate Associate Outstanding Teaching Award.

Before starting grad school, Bailey worked as a reporter covering local news and politics for The Chicago Sun-Times and The Toledo Free Press. She has also worked as a political communications consultant based out of Washington, D.C., and did press strategy, speechwriting, and advance staffing on several high-profile progressive campaigns and tours.

Bailey’s research uses a combination of historical, feminist, and critical cultural approaches to make sense of the ways women’s experiences with trauma, capitalism, religion, and writing have converged historically, and are now evolving in the current digital media landscape. Her research has received multiple awards from the American Journalism Historians Association and AEJMC, has been published in Journalism History and American Journalism, as well as the Columbia Journalism Review.

Bailey has published a chapter, “Dorothy Day and the Catholic Worker’s Legacy of Pacifism,” in 2019’s Journalism’s Ethical Progression: A Twentieth-Century Journey, edited by Gwyneth Mellinger and John Ferrè. She has also published three peer-reviewed journal articles, including  “‘We females have to be contented with the tales of adventures:’ Gender conformity in Dorothy Day's Early Reporting” and “Fresh Air Archive” in American Journalism, and “‘Is It Not Possible to Be a Radical and a Christian?’: Dorothy Day’s Evolving Relationship with the Patriarchal Norms of Journalism and Catholicism” in Journalism History.

When not exhausted by the racist, capitalist, cisheteropatriarchy (and grad school), Bailey enjoys hiking with her labradoodle, Frances, lending people books from her little library, and cooking way too much food for people she loves.