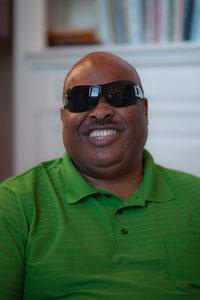 Biography: J. Webster Smith (J.W.), PhD, was born blind on March 9, 1959 in Chicago, Illinois. He is the second of five children and most of his family yet resides in the Chicago area. His hobbies include reading, watching sports, singing and playing the piano/keyboards. Dr. Smith and his wife, Regina, have two daughters, Ebony and Joshelyn.

Dr. Smith feels that as a blind African American it is essential that we expand the term ‘diversity’ and incorporate every effort necessary to create an environment that encourages openness and understanding. Dr. Smith often refers to non-disabled individuals as TABs, temporarily able-bodied individuals. He firmly believes that our differences can be our strengths and that many people live more for affirmation than bread and that we are each responsible to all for all.

Dr. Smith is a member of the National Communication Association, Central States Communication Association, National Federation of the Blind, National Federation of the Blind of Ohio, and the National Association of Blind Educators. In addition, Dr. Smith has served as a member of the Ohio State Library Consumer Advisory Committee and has served on the State Consumer Advisory Committee of the Ohio Rehabilitation Services Commission. Dr. Smith has also served on the Ohio Governor’s Council on People with Disabilities. Dr. Smith served as President of the National Federation of the Blind of Ohio from 2008-2012. In 2018, Dr. Smith was selected by Governor John Kasich for a three-year term on the first State Rehabilitation Council (SRC) for Opportunities for Ohioans with Disabilities.

Publications: Author of From the Back of the Bus to the Front of the Classroom: My Thirty-Year Journey as a Black and Blind Professor (2019). Co-author of first edition and single author of second edition of Communication and Campaigns (1998, 2015). Author of Essays on Communication and the Blind and Visually Impaired (2007), as well as selected book chapters and numerous convention papers. Articles published in The Braille Monitor. Numerous seminars and workshops on effective communication topics including interviewing skills, parliamentary procedure and stress management.