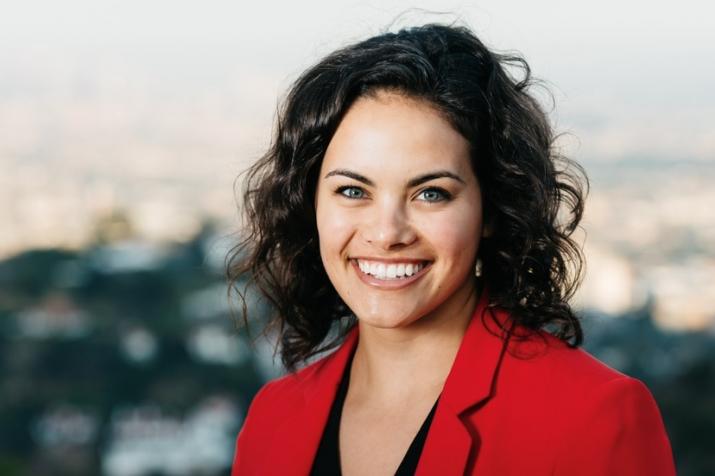 Taylor Bruck is an aspiring broadcaster, with her own YouTube channel, “TAYtalks,” and  member of the WOUB organization. Last summer, she was an intern on the TODAY show. I asked her a few questions regarding her experience in New York City and what the internship meant for her future.

Q: What is your major?

A: My major is journalism: news and information with a specialization in broadcast journalism and minoring in Spanish and marketing.

Q: What made you want to pursue broadcast journalism?

A: Growing up, I always saw the people who would anchor the news on TV. I would see them and be like “Mom, how do I get to be that person?” So through some research with my mom, we decided that I should pursue journalism. When I got into Ohio University, I dove into it and really found a passion for talking to people and hearing their stories.

Q: What made you want to pursue video creation?

A: I think that it’s important in today’s society to stand out in a different way. I want to use my voice for good, so I thought about a lot of different things/concepts for video creation. That was when I started doing these things called “TAY talks.” It stands for “Totally Authentically You.” It’s all about interviewing people who’ve struggled, seeing how they went through it or if they’re still struggling. What are they doing to cope and live as normal as possible, as well as be happy? I identify as gay, so I’m trying to be myself in today’s society, but it’s a struggle to be myself. I want to create a platform where I can be myself and others can be themselves and have a better outlook on society.

Q: Your video series “TAYtalks” has a variety of themes, such as LGBTQ+ issues, eating disorders, and living in New York City. What sparked your interest in these topics?

A: When I started my internship at the TODAY show I thought it was the perfect time to start something. I thought this is where people might follow me and want to listen to what I have to say because I think interning for the TODAY show is pretty cool. I started doing little blogs of what my life was like interning in New York City. When I came back, I had to think about how to continue this. That’s when I came up with TAY Talks, which flows really nicely with my name. I wanted to give a platform where people can talk about things that maybe are not talked about that much in society. I started talking to people who had anorexia, I talked to a man who identifies as bisexual and what that means in society. I talked to a person who does not feel like a male or female, which is called nonbinary, and what that means in society. The list goes on.

Q: How is the energy at the TODAY show? It’s so early in the morning so I can imagine the struggle to stay awake and active in the morning.

A: The energy is really high-especially when the show starts going. The anchors obviously need coffee of course and the interns are tasked to get that. When the anchors come to the plaza to see all of their fans, that’s when everyone has the most energy.

Q: What was working in the newsroom at the TODAY show like compared to the WOUB newsroom?

A: They are very different. At TODAY, there are a lot more staff members, a lot more desks in a much larger area- there are a lot more components with specific tasks. At WOUB, it’s more like I’m part of the show- I help assistant produce it. So WOUB has a lot of people doing a lot of different things to make the show happen. I’m doing way more things obviously at WOUB while at TODAY I might be doing the little nitty gritty things, such as delivering mail or conducting research.

Q: Were you ever on TV from the TODAY show?

A: Yes! So I’ve interned twice for TODAY, and the second time I did it was in LA. I was the only intern out there and most of my work focused on research. There was a producer, who identified as gay, who was talking about doing a story about how coming out has changed since the Stonewall Riots from 50 years ago [the event would air on the 50th anniversary ]. I was tasked to find people to interview related to the demographic. My heart was beating and I sitting there super nervous. I was like ‘do I tell him about me?’ and then I said, screw it--your whole thing is being totally authentically you. I ended up telling him [that I identify as gay], and he asked me if I wanted to get interviewed. I ended up having a little soundbite in the piece that aired on the TODAY show live! I came out on national television, which was super awesome.

Q: What was it like to live in New York compared to Athens, Ohio?

A: Extremely different. I was terrified at first. NYC is massive. It is huge. There are buildings and people everywhere. And you are by yourself. Well, I had my cousin, which was a nice safety net, but NYC is so much different. Athens has farms, college students and greenery with much more open space. When it comes to NYC, I personally like the busyness of it; I’m never bored there and although there are some creepy people on the streets, I consider myself a city girl.

Q: What were your responsibilities as an intern?

A: At the New York headquarters, I was doing a different task every day. Some days are working at the front desk answering phone calls, delivering mail, doing research. Sometimes you’re in the control rooms to observe the directors, and sometimes you’re getting coffee, which is inevitable. It’s kind of fun, though, because you give it directly to Hoda and other anchors so it’s nice. Other days involve being on the plaza, which is really cool because you’re interacting with fans, trying to find a story that the show is going to talk about when they come out to the plaza. That was my favorite because that was the most interactive.

Q: In what ways did your internship at the TODAY show help you professionally?

A: Well, number one, I was living alone in New York City. You grow as a person just by living in an apartment and not really knowing anybody. You have to learn how to work the subway, get to work, and make new friends. At the TODAY show, learning how to navigate working with bosses and meeting new interns, as well as how to work with celebrities, because you get starstruck in a way. However, everyone’s there to do a job so you have to learn not to treat them like that. You have to do your job and not ask for photos.

Q: Do you have important takeaways/lessons you gained from last summer?

A: Stepping foot into the E.W. Scripps School of Journalism, my goal was to get the TODAY show internship. I applied sophomore year, didn’t get it, but I did get a mini-internship with a different station called WHIZ TV. I reapplied junior year and ended up getting it. So I think my biggest takeaway is definitely: Go for what you want. Everyone has a different journey in a different path, so any internship counts and matters. As long as you work hard, you’re going to get work.

Q: What are your future plans?

A: My goal right now is enjoy college every moment I can. I have a semester and a half left, then I apply for jobs after that. I’m starting to decide whether I want to start off as a regular TV news anchor in whatever state I get a job in, or do something more digitally. I definitely want to be on air at some capacity, but I’m trying to decide whether I want to do more digital/social media things like my “TAY talks,” or start with regular hard news. I am very interested in entertainment as well and want to work in a place that’s progressive, you know, and open-minded, since I do identify as gay and I will not hide that aspect of me. I’m going to apply for a lot of jobs and whatever I feel most comfortable with, I’m going to go for it.