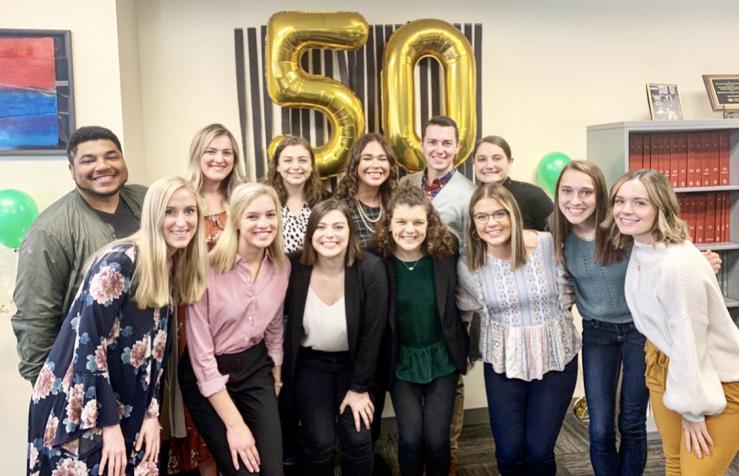 Over the past 50 years, the Hugh M. Culbertson Chapter of the Public Relations Student Society of America (PRSSA) at Ohio University has been recognized by PRSSA National, and most recently the chapter was awarded the highest honor, Outstanding Chapter, in 2018. Throughout the years, the chapter has also taken dozens of networking trips, obtained several internships and jobs, attended hundreds of regional and national conferences, written thousands of blog posts, and so much more.

However, all these accomplishments are not what the Chapter and its members (of all ages) cherish the most—it’s the relationships.

I joined Scripps PRSSA at the very beginning of my freshman year when I was encouraged by my LINKS mentor and an upperclassman in the Chapter, Natalie Butko, to attend the first meeting. As soon as I walked in the room, I felt an upbeat energy and I automatically fell in love with the Chapter and how passionate all the members were. I soon felt that same passion, and now as a senior, that passion has never gone away.

I instantly joined the Professional Mentor Program and began networking with professionals at the weekly meeting, and those connections have guided me through my professional life over the past four years. But when it comes to relationships, the friendships I’ve built with my fellow PRSSA members, specifically my fellow seniors, have had the greatest impact.

Whether it’s attending our chapter’s many social events, including the annual Thanksgiving dinner or the Ugly Sweater Christmas Social, traveling to Austin, Texas, for PRSSA National Conference or being a part of the Peer Mentor Program, the bonds I’ve made through Scripps PRSSA go far beyond our career interests. These friends have provided me with endless memories, support, laughs and love during my time at Ohio University, and I know these friendships will continue even after my time on the bricks of Athens will come to an end.

On Sunday morning, Oct. 13, we celebrated our chapter’s 50th anniversary in the Lasher Learning Center as the 2019 Homecoming weekend came to an end. Over thirty people were in attendance, including current chapter members, chapter alumni, and the director of the E.W. Scripps School of Journalism, Dr. Robert Stewart.

Chapter alumnus Aaron Brown received the Outstanding Alumni Award for his support and dedication to Scripps PRSSA. Brown is now the executive vice president at Fahlgren Mortine, a nation-wide, full-service public relations agency located in Columbus, OH. He has spoken at a chapter meeting every year since his graduation from Ohio University in 2001.

Dr. Hugh M. Culbertson was a professor in the E.W. Scripps School of Journalism for over 30 years and is considered “one of the Mount Rushmore figures in the journalism school,” according to Dr. Stewart. Dr. Culbertson, who still resides with his wife in Athens, couldn’t be in attendance due to health complications, but Chapter President Samantha Morsink read some profound, inspiring remarks that he shared.