OUIMA President Alyssa Stahl talks about her passion for VR and AR technology! 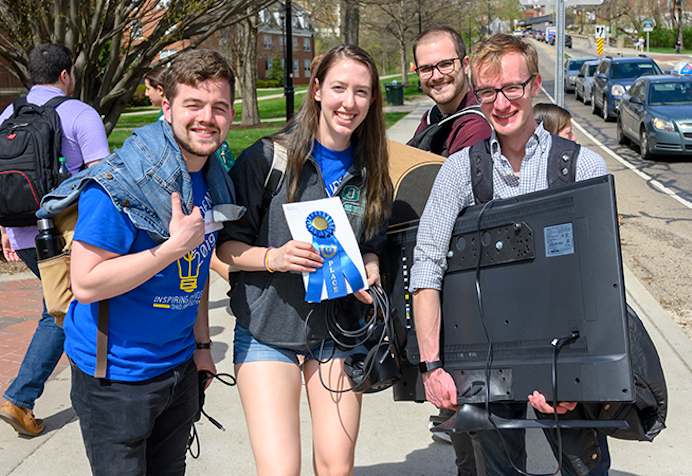 Ohio University Immersive Media Association brings together a variety of technology surrounding the GRID Lab. I interviewed Alyssa Stahl, the President of the organization, to give me a 360 viewpoint about the organization.

Q: Your organization works with a variety of equipment, such as augmented reality, 360 audio/video, and even virtual reality; which one do you enjoy using the most?

A: Personally, I am more interested in virtual reality. That’s been my go-to since I started learning about immersive media, probably because I’m very fascinated with immersion and always have been since I was a kid; I used to have one of those toys you clicked through- I was obsessed with that. I would just stare at it for hours because I felt like I was in the picture. So I was introduced to that concept here, like, ‘Oh my god, I can make this and turn this into a career.’

When it comes to the org, we have a variety. I think people are just generally curious about the concept. So they just come and they're like, I want to learn this, and that, and that and everything else. At our first meeting, I was like, ‘What does everyone want to learn?’ And it's just all over the board. So I think it's that more people are really intrigued by the concept and want to learn more.

Q: What sort of projects have you worked on in the group?

A: When we first started, we did a 360-video shoot at the Clemson Aquarium with a selfie stick-like tool called a rake. Then one of the divers went into the manatee tank with it and took it underwater. You have 360 video footage of underwater and this one manatee at one point it comes up and bops the camera; it's funny because we put people in VR and have them watch it and one person fell over their chair.

Last year, we wanted to make an interactive 360 horror experience, although it's more like a comedy-horror. The concept is, like, you're in a tent with your friends and “something” is outside; eventually, the goal is to have everyone survive. It's kind of like a choose-your-own-story concept.

Currently, we're working on a Snapchat scavenger hunt called Taste of Athens, where you receive snapcodes/AR clues for destinations around the city. There's a software we use called blend studio, and it is used for creating Snapchat filters. And that's essentially augmented reality. So it's a good way to kind of introduce people to a simpler format of making AR before you completely dive into [game-development software] Unity or things like that. Especially because what they have reminds me of a very simplified version of Unity, which is like the primary game engine we use for VR and AR development.

Q: What are the main functions of OUIMA?

A: We do projects together as a group and also have educational sessions. So some meetings I’ll bring someone in or one of us will do an educational session about x, y, or z- we made a list at the beginning of the semester asking what everyone wanted to learn. We had one early about how to make Snapchat filters. Another session was one of my friends coming in to give a tutorial on coding and games.

Q: I know the GRID Lab recently obtained the equipment for VR, so how old is the organization?

A: It is only five years old. It was started by people who worked for the GRID Lab and were media majors.

Q: What made you interested in joining the OUIMA?

A: I am an Honors Tutorial College student so I have a general media major but I don’t have to choose a specification like most people. We were introduced to everything within the Media school and when I tried VR at the GRID Lab I was like, ‘Oh yeah, I want to do this.’ So I started tailoring everything I did after that to the goal of getting a job in the GRID Lab; one of those things was to join OUIMA, which helped me know more about VR and gave me accessibility to the equipment at the time.

Q: What sort of obstacles have you gone through as president?

A: The issue that we have right now is the low numbers. We are a very small group and that is sort of our fault because we haven’t really gone to the classroom for promotion. On top of that, we don’t have that solid “base” and reputation so many people don’t know we exist. We just lack awareness.

Q: What are you planning to do next for the organization?

A: The goal is to really just complete our projects. I think if we get it done in time, we should enter them into the Student Expo in the spring. Also, to have more educational sessions on topics we haven’t covered yet, and hopefully, to advertise more.

Stahl does all of her work and projects in the GRID lab at Ohio University, which offers cutting-edge VR and AR technology for students. You can check out the program and be a game-changer in this industry here!