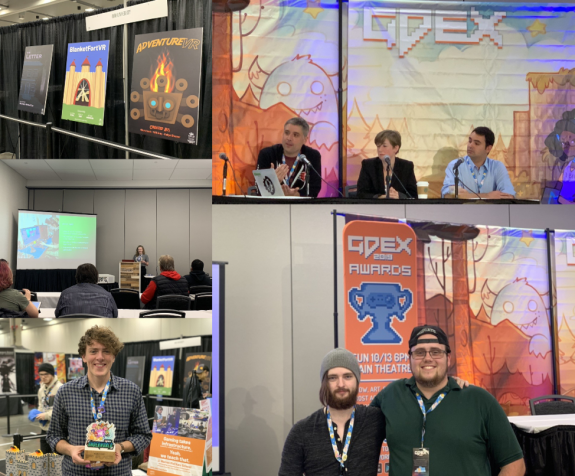 GDEX is a game developer convention in Columbus that focuses on the growth of the game industry and game technology through a curated showcase of game and VR developers, speakers and events. Students from the J. Warren McClure School of Emerging Communication Technologies and Game Research and Immersive Design (GRID) Lab were among the developers and speakers chosen to present at this year’s expo. This year, the McClure School and GRID Lab had a 20’x20’ booth exhibiting three student walkable VR experiences: AdventureVR created by games and animation students Will Gray and Mitch Cook along with MFA Communication Media Arts student Kellye Blosser, BlanketfortVR created by Honors Tutorial College games and animation students Alyssa Stahl, Reilly Zink, and graduate Jessie Robinson, and The Letter created by Integrated Media student Warren Stratton.

For much of the conference, the McClure booth had an hour-plus line of game enthusiasts wanting to try these experiences, and each VR creation received significant praise. AdventureVR was a finalist in both Best AR/VR Game and Most Innovative award categories, the experience judged not as a student project, but as an indie development compared to the work of a variety of experienced developers and non-developers. The game that won Best AR/VR Game (and went on to win the Best of Show award) was created by Schell Studios, a company in Pittsburgh with 120+ developers. The Schell Games staff present really liked the work that our students did!

In addition to the student development work, we had five presentations given by Ohio University staff and students. Some of our OHIO students also competed in eSports competitions this year, Warren Stratton from Integrate Media winning third place in the Mario Kart tournament. Overall, it was a great recruitment event, bringing in many prospective students. Until next year!

To Learn more about the GRID Lab and the McClure School's Games and Animation program at Ohio University, check out the degrees we offer here!