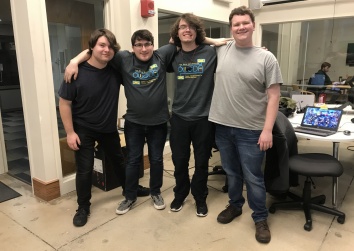 Kalan Greiner is a senior studying Games and Animation. He recently participated in an event called a game jam, which gives participants 48 hours to create a game. Greiner goes into detail about the work and what it was like to be in that environment.

A: A game jam is an event where teams will be given some guidelines, and then work together to make a game in a given amount of time. This one followed the guidelines set by the Global Game Jam event and was done over the course of 48 hours, 5 p.m. on Friday to 5 p.m. on Sunday. Our theme was "repair".

Q: Who typically participates in the Game Jam?

A: People that make games, I suppose! Anything that would go into the process, programmers, artists, musicians, voice actors, all of these could join. I'm sure there are plenty more talents that could go into working with a team. OUGDA hosts it and most of their members participate, but I'm only mildly affiliated with them because I always have to work during their meetings. Conner, one of the programmers on our team, recruited me to join in partway through, while I was playing Magic the Gathering with his roommate on the Friday evening of the event.

Q: What were your main responsibilities?

A: I was a dedicated artist for the team. Conner had already done art on Friday that I built off of, as well as the wonderful menu art that he did, but switched to programming with Sam and Trent once I joined. My responsibility was drawing all the sprites from there, and animating the main character. Our game was to be made around the theme "repair", and the others had already decided to build it around a dwarf repairing pickaxes the night before I started. I also helped discuss some of the design decisions that we made with the rest of the team, but my primary role was the artist.

Q: What sort of struggles did you face as the event progressed?

A: My end of the work went pretty smoothly, most of the major art was done on Saturday, with more minor doodads and asset fixes being done on Sunday, but the programming kind of came down to the deadline. I was really impressed with how Connor, Sam, and Trent figured everything out in a tight time frame as they did. I found the whole process was at once both really frantic and surprisingly chill. Connor told me once it was over that they would never have been able to release the game if I hadn't joined on halfway through, which made me feel really good because the whole reason I didn't join it from the start was because I kind of thought I was too much of a hack to be worth anything to them. In the end, I found it really artistically fulfilling, and it's made me feel a lot more confident about my animation going forward.

Q: What was your finished project?

A: It was a little game called Dwarfsmith! You play as a dwarf blacksmith who runs around his workshop repairing pickaxes to be delivered to the dwarven miners by a big angry falcon. It's sort of a sequencing/time management game where you try to put the broken pickaxes through the repair process as quickly as possible, to make as many pickaxes as you can before time runs out.

My big regret for the game is that I didn't think to make an instruction screen for the game, so I guess I'll just put the sequence here: put broken pickaxe into the oven, cool the pickaxe head in the bucket, put the head on the anvil with a stick, hammer it, then put it on the bench to be delivered.

Q: Did you enjoy the game?

A: Yes! I was surprised by how much I enjoyed it actually. I kinda thought it was going to suck throughout development, but in the end, I found the process of trying to run the pickaxes as quickly as possible to be really fun! We're actually working on an expanded version of the game (Dwarfsmith: Game of the Year Edition) that uses some of the extra ideas and assets that couldn't be implemented in the 48-hour time frame. It should include a system where making pickaxes gives you money to buy golden versions of all the items you use in the game, a fix for the pickaxe carrying falcon, and instructions for how to actually play the game, built-in. It was good when we released it, but I think it will be really good after we've polished it up.

Q: What sort of videogames do you enjoy playing?

A: I am the proud vice-president of OU's smash club. I focus on Smash Ultimate, but Melee is my true love. I'm also really into sort of old-school style arena FPS games, like Doom, (new and old) Quake, Team Fortress 2 and Halo. Tetris and Magic the Gathering are favorites too.

Kalan Greiner is also part of the esports collegiate known as Bobcat Esport. Kalan does most of his school work in the GRID lab, Specializing in AR/VR technology for the future!