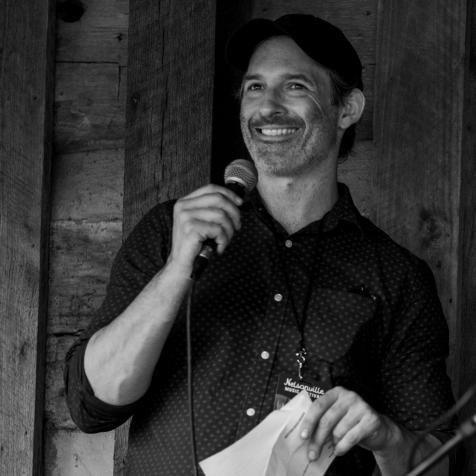 Josh Antonuccio is a lecturer in the School of Media Arts & Studies and mentors students pursuing a variety of topics, such as sound design, music production, virtual reality music and immersive media. I asked Antonuccio a few questions about the events and opportunities he's involved with at OHIO that bring students closer to careers in the music industry.

Q: Why did you decide to work at Ohio University?

A: I was very excited at the prospect of building an innovative and competitive music industry program at Ohio University, creating engaging partnerships and opportunities in the music industry for students. As well, I was thrilled to get to return to my alma mater.

Q: What made you pursue music production?

A: My love of music goes back to my earliest memories. I was always enthralled by music growing up and once I got into guitar I was all about being in a band.  Basically, in high school I was focused on being a writer and performer, playing with bands in clubs throughout Pittsburgh. Performing was something I continued doing heavily through my time at Ohio University. However, I didn’t know much about how music was recorded and/or produced. That was still a total mystery to me. During my sophomore year, I got asked to play guitar on a student’s recording project in the studio here and that was kind of game-over for me. I became instantly obsessed with the process of making records.  Ultimately, that led me on the journey of starting my own studio (3 Elliott Studio) in the early 2000s, where I continue producing albums to this day.

Q: Who are some stand-out artists you enjoyed listening to at the Gladden House Sessions? With a team of Media Arts & Studies students, Antonuccio produces these intimate performances each year at the Nelsonville Music Festival.

A: That’s a really tough one, there are too many to count. To date, we’ve produced close to 90 episodes over six seasons. My favorite moments? A few standouts are Tyler Childers' 2017 appearance to 50 people before he was a household name; this past year’s “secret shows” with The Wood Brothers and Mandolin Orange; Tank & the Bangas pop-up set in 2018; Aldous Harding bringing all of us tears with a mesmerizing set in 2016; and Valerie June’s impromptu episode in 2014, during the first season. Lake Street Dive in the second season was another one that was exhilarating.

Q: What are some responsibilities you have as Director of the Ohio University Music Industry Summit?

A: Paul Mass of the Center for Entrepreneurship and I started the Music Industry Summit in 2018. Based on the success of that first year, I wanted to make the Summit a substantive day-long event, making it a centerpiece for music industry education in Ohio and beyond. I reached out to Drew Holzapfel from the OU Concert Series, and when he came on board, we were really able to take it to another level this past spring. We’ve got a phenomenal team now and my responsibility is to develop the programming, secure panelists and shape the overall schedule. I also host at least a one-panel session. Getting to interview Chuck D of Public Enemy for the 2019 keynote was such a privilege. He’s been a life-long hero of mine. Having people like Matt Thomson from Co-lab and Mackenzie Kucharsky from the Voinovich School join our team has also been invaluable. Together, we’ve been putting plans in place for the third Annual Summit on March 26, 2020, and have another incredible lineup in the works.

Q: Who were some of your favorite notable visiting artists that you brought in for your Scripps Visiting Artist Series?

A: Partnering with Bob Boilen of NPR Music has been a blast. He came on board with me in 2017 and we’ve produced three of these together now. Last year was incredible with Tank & the Bangas coming after debuting on Fallon the night before. They are up for a best new artist GRAMMY, which makes it even better. I really loved the year Sharon Van Etten came. She was so great with our students and had critical insight on navigating the music industry as an artist. Her career has taken off even further since that interview event, with her 2019 album making it on many critics’ “Best of 2019” lists.

Q: What other current projects are you working on?

A: I’ve been further developing the MDIA Master Class series, which allows Scripps students to work with leading producers and engineers in their respective studios. Last month I took students to a master class in NYC with 7-time GRAMMY-winner Michael Brauer (Coldplay, John Mayer, The Rolling Stones) and this month I’ll have another group going to Austin, Texas, to work with producer Jim Eno of the band Spoon. Also, I’ve been working on the final stages of the 30-student team going to the OHIO SXSW course in March, as well as preparing for the second year of the Summer Industry Master Class at Bonnaroo and Forecastle, which gives students the opportunity to work backstage at some of the biggest festivals of the summer. Our first time running the summer industry course was this past summer and it was such a monumental experience for our student team. One of the students got to perform a closing DJ set at Hayley Williams’ plaza during Bonnaroo. It was quite magical.

Outside of my work in Scripps, I was recently awarded AIA funding to develop a workshopping process for faculty across the university who are interested in developing similar industry-based experiential courses in their cognate areas. My team and I will be looking to start offering these developmental opportunities to OHIO faculty in 2020.