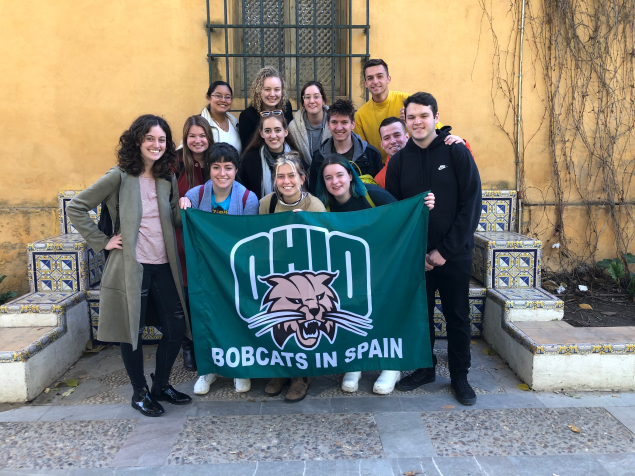 Scripps students had the opportunity to spend their winter break in Spain to enjoy the sites and work on a documentary. Two students answered a few of my questions about the trip. Jake Haire is is a sophomore studying Integrated Media from Brecksville, Ohio (my hometown too!). Katharine Morey is a senior from Chagrin Falls, Ohio, majoring in Journalism: Strategic Communication. Check out how their trip went!

This is the third in our series featuring Scripps students who have participated in experiences offered through the Office of Global Opportunities. Check out what else they have to offer here!

Q: Why did you want to participate in the trip?

Jake: To further my experience overseas and acquire skills in pre-producing fiction and nonfiction forms of storytelling.

Katharine: I've wanted to study abroad since freshman year but between my classes and internships, I didn't have the time. By selecting a program which took place over winter break, I was able to spend a month doing a short-term study abroad program which, because of the shorter length, fit perfectly into my schedule and was still long enough for me to feel like I became a part of Spain's culture.

Q: What professional skills did you develop during the trip?

Jake: I developed relationship building through the screenings provided through the program. Moreover, interacting with the interviewees required techniques ... such as being respectful and being a good listener.

Katharine: Although I'm a journalism major and the program was through the Media Arts and Studies school, I was able to work on a documentary which helped develop my storytelling skills. As a former broadcast journalist, I was able to apply interviewing and technical skills I had spent years developing, cross a language barrier through the help of a translator and successfully create a documentary.

Q: What are your career goals?

Jake: My career goal is to one day be paid to do what I love, which is filmmaking. Once I reach that, seeing my name on the credits of a film would be amazing. The end goal is to be a creative director for narrative media.

Katharine: I would like to work in the field of public relations in either brand marketing or crisis communications at a top PR firm.

Q: How do you think the Spain experience might help you achieve your career goals?

Jake: The Spain study abroad program offers some amazing resources if one wishes to pursue the narrative route. Preproduction-wise, there is a fictional short story that you will adapt into a screenplay format. There will be a couple of narrative film screenings where afterwards one of the professionals involved in the making of the film will come out and answer questions. It can provide some incredible feedback in how to maneuver through an uncharted pathway such as making it in narrative productions.

Katharine: It didn't really...I studied abroad so that I could gain credits toward graduating after finding I was six short of being able to graduate on time last semester. With the trip, I'm now in 24 credits this semester so I can graduate on time.

Q: What is the most unexpected part of the experience?

Jake: The most unexpected part of the experience, for me, was how long a month felt at the beginning of the trip, and how short it felt by the end of it.

Katharine: The most unexpected part of the experience was "accidentally" exploring part of a castle in Granada, Spain. On one of my favorite tours, we went to the Alhambra, which is an ancient palace and fortress located on a mountain, overlooking the rest of the city. Our tour was about three hours long and went through the Alhambra's palace and gardens portion, but not the fortress side. Our tour ended and the rest of our group left to go grab tapas and drinks. I wanted to go back inside the Alhambra to visit this bookstore they had near the entrance. I walked in with my best friend, Lexi Murray, and we found a way to enter the castle/fortress portion which wasn't shown on our tour. It's the most stunning place I've ever been--I don't think anything I'll ever see can top it. The castle was old, created from sandstone blocks and with each step, we saw a more and more impressive view. We found our way to the highest turret and could see all of Granada, the Sierra Nevadas (a mountain range), smaller mountains in the distance--everything. Our trip was full of "wow" moments that took our breath away but that was the most phenomenal. The fact we were the only two on the trip to see it (kind of like Lex and I's secret little place) made it that much more special.

Q: Are there any good stories from your time there?

Jake: On one of our first days in Sevilla, the group was taken on a bike tour. In one of the main plazas of Sevilla, Puerta de Jerez, a students lost control of his bike and was literally launched from it. He skidded so hard across the ground multiple people ran over to help him. It was pretty funny.

Katharine: Good stories, where do I even begin? Jake, Lexi and I also got "lost" in Portugal. That was a great time. Our group took a bus from Seville to Albuferia and we left at different times to head back. The three of us left later because we wanted more time in Portugal. Long story short, we ended up going to the bus station and after waiting for hours, we realized we went to the wrong one. We were tired, upset and defeated but ended up getting a hotel for the night not too far away. Even though we were upset, we still felt accomplished that we were able to navigate a different country, overcome the battle that is the language of Portuguese, and make it back to Seville safely the next morning--all on our own.

We traveled to Barcelona, Seville, Granada (all in Spain) as a part of the program and went to Albuferia, Portugal, as a weekend trip for New Year's Eve for a huge beach party. Seville was the city we lived in for most of the month.